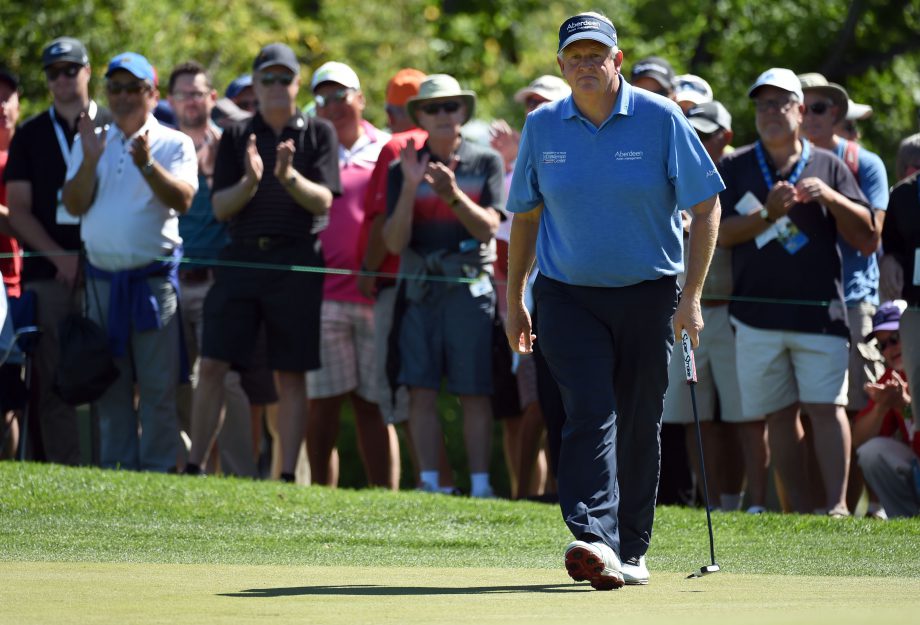 CALGARY, Alberta – Colin Montgomerie birdied three of the final four holes for an 8-under 62 and the first-round lead Friday in the Champions Tour’s Shaw Charity Classic.

Playing alongside defending champion Fred Couples and Miguel Angel Jimenez, Montgomerie had nine birdies and a bogey at Canyon Meadows.

The Scot successfully defended his title in the Senior PGA Championship in May for his third major victory on the 50-and-over tour.

Australia’s Peter Senior was a stroke back.

“I holed a couple of big putts in the first four holes, so it got me going and I played a little bit better,” Senior said. “Played pretty good on the back side, missed a couple of short ones on the last two. … But all in all, I haven’t played well for a long time, so it’s just nice to actually put a score on the board.”

Couples and Jimenez each shot 67. Last year, Couples chipped in for eagle for a course-record 61, then beat Billy Andrade with a tap-in birdie on the first hole of a playoff.

“I played OK,” Couples said. “I watched a great round.”

The players were allowed to lift, clean and place their golf balls in the fairways because of wet conditions.

“Tomorrow, just got to shoot really low,” Couples said. “I don’t know if we’re going to play the ball up or down, but hopefully we don’t touch it. It’s not like Monty misses fairways or anything, but it just makes the scoring a little harder to not clean it. I need to shoot 66 or 65.

“If they tee them up, I think a lot of people will shoot the same score. But the course was perfect today. It was a little wet, but Monty played phenomenal golf.”