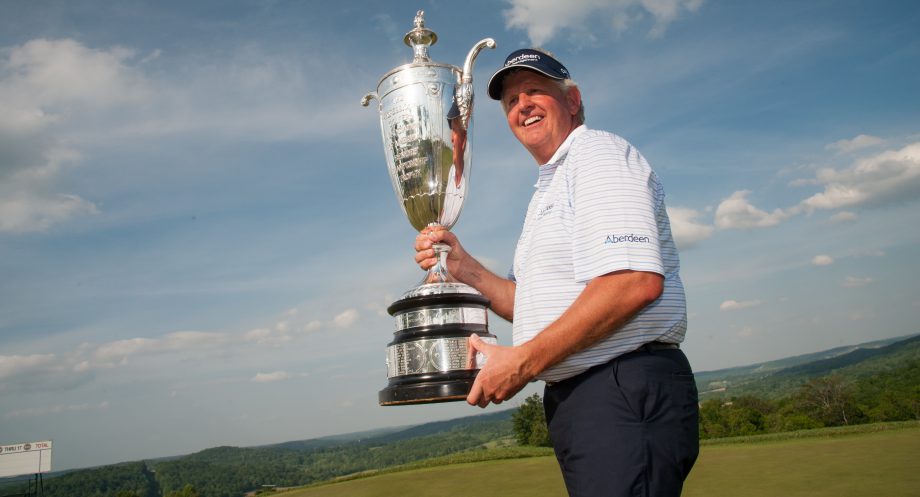 FRENCH LICK, Ind. – There were no last-second buzzer-beaters in Larry Bird’s hometown on a bright, breezy Sunday.

Colin Montgomerie turned in a command performance, shooting a 3-under 69 on the treacherous Pete Dye Course at French Lick Resort to win the Senior PGA Championship by four shots.

Montgomerie earned $495,000 for his third senior major championship victory in 10 appearances, including three of the past six. The 51-year-old Scot’s 8-under total of 280 made him one of only five players under par, the fewest since three closed the championship in red numbers at Canterbury in Cleveland in 2009.

Montgomerie was happy but drained.

“It was a difficult position to be in at the start of the day, being three ahead,” said Montgomerie, who called Dye’s design one of the iconic courses in America. “Nowhere to go but down with every hole out there a potential double bogey. I could never relax. I could never relax at all.

“Very, very tiring mentally. Every shot had to be executed or you could be in trouble. That’s a test and a half.”

Montgomerie won the 2013 Senior PGA at Harbor Shores in Michigan, and two months later took the U.S. Senior Open in a playoff over Gene Sauers at Oak Tree in Oklahoma.

It has been an extraordinary life-after-50 turnaround for a player who won 31 European Tour titles, topped that tour’s money list a record eight times, represented Europe in the Ryder Cup eight times but went 0 for 71 in major championships.

Six times he was a runner-up in those majors, three times in the U.S. Open and once each in the British Open and PGA Championship.

“He’s been in contention in majors pretty much his whole career so he’s very familiar with that,” said Brian Henninger, who matched Scott Verplank’s 71 to give both a share fourth place at 2 under. “He obviously hasn’t always executed and performed like he wanted to, but even at his age, he’s probably learned through some of his experiences.”

Toledo started the day at 1 under and but made birdies at 1, 5 and 7 and twice got within a stroke of Montgomerie on the front nine. Both times, the leader answered with a birdie.

After lipping out a short par putt at No. 1, Montgomerie ran off birdies at 5, 7, 9, 10 and 12. He was 9 under for the tournament, five strokes clear of Toledo and in charge.

“That’s what it takes. He knows how to win,” said Toledo, who played without a bogey Sunday. “He loves the pressure. There’s nothing I could have done. It was a great week for me. The course was outstanding, the crowds were great. It was a great tournament.”

Montgomerie made bogeys at 15 and 18 but his lead was too large, his grasp too sure.

“When I holed the putt at 12, I felt safe,” Montgomerie said. “I knew how tough that finish is.”

Montgomerie and his Sunday playing partner and World Golf Hall of Fame colleague, Bernhard Langer, have won four of the last five major championships on the Champions Tour. Jeff Maggert’s win last week in Alabama in the Regions Tradition is the lone exception.

So it seemed the final round might turn into a match play competition between Montgomerie, at 5 under, and Langer, 2 under, in the final twosome, but no drama developed.

Langer caught an awkward lie on the margin of a bunker and the rough alongside the second green and made double bogey. Then he missed the green and bogeyed the par-3 fourth. When Montgomerie birdied Nos. 5 and 7, Langer was seven shots behind.

It was somewhat reminiscent of the 2014 Senior PGA, where they also played in final twosome and Montgomerie shot 65, Langer 70.

Canada’s Rod Spittle climbed 30 spots up the leaderboard into a tie for 34th after a final round 69. The St. Catharines, Ont., native finished at 8 over.