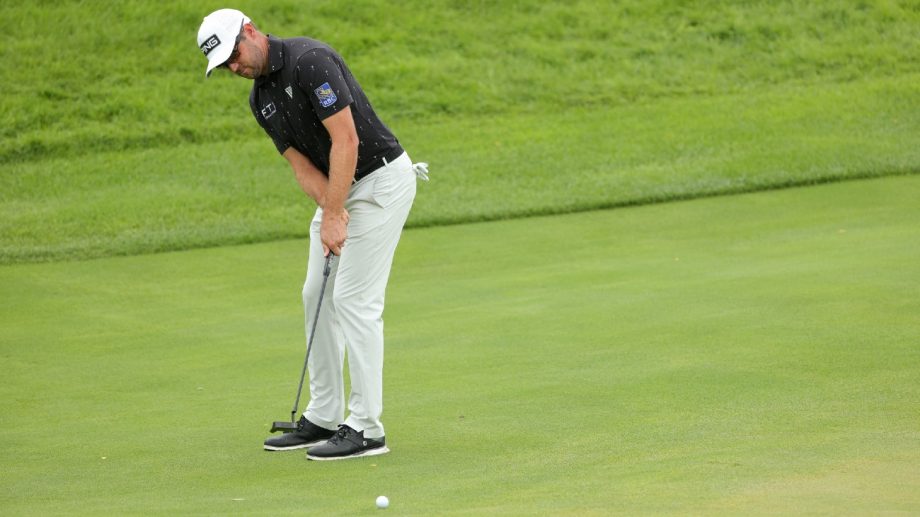 JERSEY CITY, N.J. (AP) Tony Finau was developing a label as the player who did everything right but win. What he never lost was his belief he could beat the best.

That moment finally arrived late Monday afternoon at The Northern Trust against the sunlit backdrop of the Manhattan skyline. Finau delivered the best back nine of his career to track down Jon Rahm, the world’s No. 1 player, and then beat Cameron Smith in a playoff.

Finau tapped in the winning par putt at Liberty National, tilted his head to the sky and fluttered his lips in a sigh that was equal parts relief and satisfaction.

“It’s more massive I think for just my sense of
accomplishment,” he said. “It’s hard losing, and it’s hard losing
in front of the world. I’ve done it already a couple of times this
year. That made me more hungry. If it doesn’t discourage you, it
makes you more hungry. You guys keep telling me, `When are you going
to win again?’ That makes me more hungry.

“It all equals up to now. It was time for me to win again.”

In a rain-delayed start to the FedEx Cup playoffs, with players sitting out Sunday as Hurricane Henri moved off the eastern seaboard, Finau ended a drought that had stretched more than five years and 142 starts on the PGA Tour.

He had eight runner-up finishes, three of them playoff losses, and 39 top 10s since his lone victory in the Puerto Rico Open in the spring of 2016.

That ended with a dynamic charge, starting with a birdie-eagle-birdie stretch for a 30 on the back nine to close with a 6-under 65.

And like most victories on this tour, he needed plenty of help.

Rahm, who had a two-shot lead at the turn, made his first bogey of the final round on the 15th hole and then had to settle for par on the reachable par-4 16th, which felt like a bogey. He had to settle for a 69 to finish alone in third.

Smith had a big finish of his own with two straight birdies and a chance at three in a row with a 25-foot putt on the 18th for the win. He missed and shot 67, and that was as close as the Australian came to winning.

Returning to the 18th in the playoff, Finau pounded his drive down the middle. Smith pushed his drive so wild to the right that it sailed over the retaining wall that separates Liberty National from the edge of the Hudson River.

At that moment, the playoff was effectively over. For Smith, it was the second straight time a bad drive at the end cost him a chance to win.

The timing was just right for Finau. He moved atop the FedEx Cup standings for the first time with two events left in the chase for the $15 million prize.

It also moved him to No. 6 in the Ryder Cup standings. The top six after the BMW Championship this week automatically qualify. Even if Finau falls out, it would be hard for U.S. captain Steve Stricker to leave him off the 12-man team.

“I told myself, `If you didn’t win, you’re not going to make the team.’ Although I’ve always been high in the rankings, I wanted this validation more for myself to be part of a team like that as a winner this season and playing good golf going into the Ryder Cup,” Finau said.

Finau, who had to save par from the bunker with a 6-foot putt on the 18th in regulation to finish at 20-under 264, only had to two-putt for par in the playoff.

There were other big winners Monday, starting with Keith Mitchell. He was at No. 101 in the FedEx Cup, and only the top 70 advance to the BMW Championship. Mitchell needed a big finish and delivered with three straight birdies for a 69 to tie for eighth at 13-under 271.

Tom Hoge started at No. 108 and tied for fourth to advance. That was his best finish of the year, and it came at just the right time with points counting quadruple.

Also moving on to the BMW Championship later this week were Alex Noren, Erik van Rooyen, Harold Varner III and Harry Higgs. Van Rooyen was in contention on the front nine until he hit two shots in the water on the par-3 11th and made a quadruple-bogey 7.

Canadian Corey Conners walked away from the Northern Trust with a personal victory of his own, scoring his career lowest score of 62 to wrap up the third round. Conners momentarily tied the course record before Cameron Smith set a new record of 60 in the same round.

Conners rocketed up the leaderboard and finished the tournament tied for the 8th spot, after the postponement. Listowel Ont.’s Corey Conners is one to watch at the BMW Championship alongside fellow Canadian, Mackenzie Hughes.

The final round was postponed on Sunday as Hurricane Henri approached, and the edges of what became a tropical storm at landfall dumped more than 6 inches of rain on Liberty National. There was another four-hour delay in the morning and spectators were kept away.

They missed quite a show, and a popular winner. Few others have been so gracious as so many chances to win got away from him.