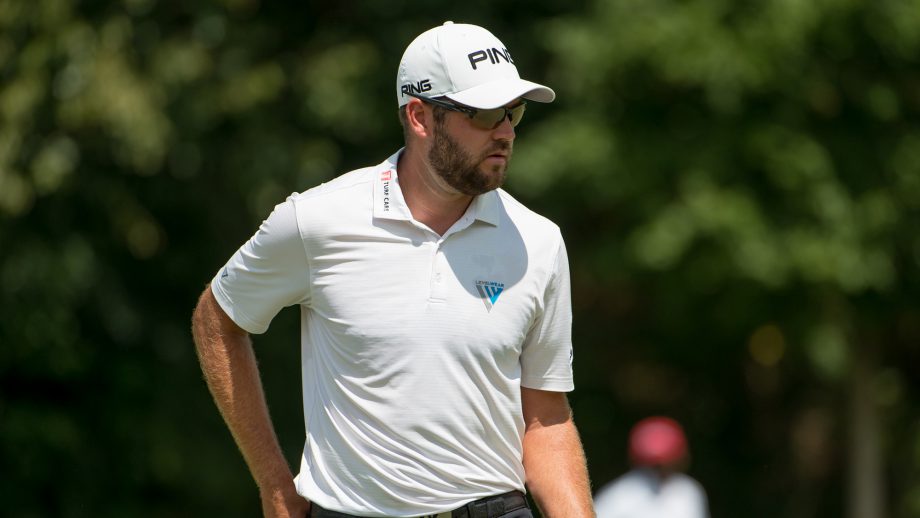 ATLANTA – A storm delay at the Tour Championship slowed the momentum of Brooks Koepka and Justin Thomas, right when they were starting to pull ahead in the chase for the $15 million FedEx Cup.

The final hour Friday showed how quickly it can change – and for Rory McIlroy, why no one is holding back in the season finale.

Koepka didn’t make a birdie on the back nine until the par-5 18th when he hit 5-iron from 239 yards to 8 feet behind the hole. He had to settle for a two-putt birdie, a 3-under 67 and a one-shot lead. Because he started the tournament at 7-under par as the No. 3 seed, he was at 13 under going to the weekend.

“The lead is always nice, so I’ll take that,” Koepka said. “The rain delay kind of killed any momentum I had. I didn’t feel like I had any good golf shots after the rain delay, but that’s part of golf. Everybody’s got to deal with the same thing.”

He was one shot ahead of Justin Thomas, who played his final 10 holes in 1 over for a 68, and McIlroy, who had a birdie-birdie finish.

And just not any birdie.

McIlroy, who trailed by four shots early on the back nine, sent his drive on the 18th hole so far to the right it brought the out-of-bounds practice range into play. He was fortunate to have his ball in dirt under a pine tree, leaving him 242 yards away. McIlroy decided to choke up on a 5-wood and slice it around a tree some 50 yards in front of him, then over the water and near the green.

It came out perfectly, landing in a tiny strip of grass behind bunkers. He got up-and-down for a 67 and was right where he needed to be.

Xander Schauffele also made a late surge with a birdie-eagle finish, holing a 25-foot putt on the par-5 18th for a 69. He was two shots behind. Paul Casey had a 67 and was four shots behind at 9 under.

Giving McIlroy good vibes going into the weekend was the score no one sees. McIlroy and Casey are at 7-under 133 over two days, the best 36-hole score in the 30-man field. So he figures he’s doing something right with his game.

The scoring for the FedEx Cup underwent a radical change this year, with players in the highest position in the FedEx Cup getting a head start in relation to par. Thomas is the No. 1 seed and started at 10 under before a shot was even hit. Koepka began at 7 under, McIlroy started at 5 under and Schauffele was at 4 under.

The lowest score to par wins the FedEx Cup and its $15 million bonus.

McIlroy didn’t want to waste any chances, and all he saw from the woods was opportunity.

“I had a little gap,” he said. “Whenever you’re on my side of the tree, you could see what’s on the right-hand side. I obviously curved it a lot. I thought that if I flushed a 5-wood, it might be too long. So I really gripped down on it. In hindsight, I wish I hadn’t – might have got on the green.

Koepka ran off three straight birdies late on the front nine to tie Thomas for the lead, and then never got back on track after players returned to the range and headed back to the course. He missed the green from the 13th fairway and made bogey. He had to scramble for par from short of the 14th green, and behind the 17th green. But his tee shot found the 18th fairway, setting up the birdie he needed.

Thomas, who began the tournament with a two-shot lead and was tied at the top after his opening 70, quickly got his game back in order and went out in 32, tied with Koepka.

“It would be hard for me to say that it didn’t kind of stop my momentum because I was playing really flawlessly that front nine,” Thomas said. “The course was playing a little different after that delay. … For as much as I feel like I scored well on the front nine, just nothing got going on the back nine.”

He’s still one shot behind, and finally he has a leaderboard that makes sense to him.

Thomas said it was strange for him to see 10 under next to his name as he was starting out Thursday, and that he had a two-shot lead before hitting a shot.

“Today definitely felt more normal,” he said. “It felt like I was just trying to build a lead as opposed to yesterday.”

Corey Conners of Listowel, Ont., the lone Canadian in the field, shot 71 and sits 15th at 2 under.

Koepka will play in the final group with Thomas, the last two to win PGA Tour player of the year. McIlroy and Thomas have won the FedEx Cup two of the last three years. Schauffele won the Tour Championship two years ago and has yet to have a round over par in his 10 trips around East Lake.

Halfway through, and the FedEx Cup finale is really just getting started.