Conners tied for 15th, 6 under going into final round at the Masters 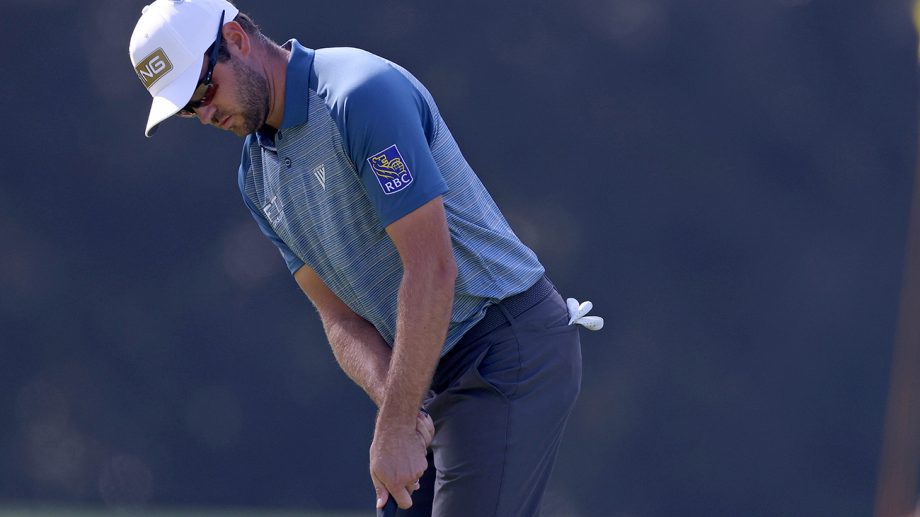 AUGUSTA, Ga. — Even without spectators in November, the Masters promised to deliver more drama with 10 players separated by a single shot going into a weekend filled with possibilities.

And then Dustin Johnson turned it into a one-man show.

The No. 1 player in the world looked every bit the part Saturday, racing away from a five-way share of the lead with an explosive start — 4 under through four holes — and never letting his foot off the gas until he had a 7-under 65 and matched the 54-hole Masters record.

Sunday will be the third time Johnson takes a lead into the final round of a major, along with two other majors where he was tied for the lead. His only major was the 2016 U.S. Open when he came from behind. Most recently, he had a one-shot lead at Harding Park in the PGA Championship this summer, closed with a 68 and lost to a 64 by Collin Morikawa.

This effort was master class. Johnson used putter from above a slope to the right of the 18th green to 5 feet and holed that for a par to cap off another bogey-free round and reach 16-under 200. That ties the record set by Jordan Spieth in 2015, when he went on to a four-shot victory over Justin Rose and Phil Mickelson.

Not all the players chasing Johnson are as familiar. Two of them are Masters rookies.

Sungjae Im, the supreme ball-striker from South Korea who won his first PGA Tour title two weeks before the COVID-19 pandemic shut down golf in the spring, birdied the last hole for 68. Abraham Ancer of Mexico saved par on the 18th for a 69. They were at 12-under 204, along with Cameron Smith of Australia.

Smith opened with 12 pars before running off three straight birdies and scrambling his way home to a 69.

Corey Conners maintained his status as the lowest scoring Canadian at the Masters, and managed to stay in the top 20 — he jumped two spots to T15. The Listowel, Ont., player posted a 71 today, putting him at 6 under going into the final round.

Nick Taylor of Abbotsford, BC., shot a 69 in the third round, tying for 29th at 3 under. Mike Weir of Brights Grove, Ont., follows at 2 under, tied for 36th after a round of 71. Adam Hadwin, another Abbotsford player, missed the even cut by one shot after round two.

Justin Thomas and Jon Rahm had their chances only to make untimely mistakes. Rahm nearly topped is second shot on the par-5 eighth and hit his next one off a tree and into the bushes on his way to a double bogey. Thomas sailed his second shot over the 15th green and into the water, making bogey on a par 5 where he was hoping to make up ground.

“Seriously? How would I describe? Pretty awful,” he said.

Starting times for the final round have been moved up to finish by 3 p.m. so CBS can honour its NFL contract, and it will be threesomes off both tees. And just like all week, and all year, there will be no roars to add to the pressure.

Defending champion Tiger Woods will stick around Sunday to present the green jacket, and he’ll have to leave his at Augusta National until he returns.

Woods was 4 under through 10 holes to start the Masters, and he picked up only one more shot over the next 44 holes. He finished off a 71 in the second round, had a 72 in the third round and was 11 shots behind.

It likely didn’t help the 44-year-old Woods to go 26 holes on soft turf of a hilly course,

“It’s just part of the deal,” he said. “If you have long days like this, I’m going to get a little bit sore, which I definitely am.”

U.S. Open champion Bryson DeChambeau was more dizzy than sore. He felt so odd on Thursday night that he had another COVID-19 test to be sure — it came back negative — and the betting favourite of this Masters was in the middle of the pack.

The scoring has been low all week. The 36-hole cut Saturday morning was at even-par 144, the lowest in Masters history, another update to the club’s record book.

Still in front of Johnson is a chance to set the 72-hole record. All he cares about is a green jacket, and given his past experience, he knows better than to look ahead.

“I feel like I’m swing well and I’ve got a lot of confidence in what I’m doing. Everything is going well,” he said. “There’s a lot of really good players right around me. I’m going to have play aggressive when I can and play smart when I can’t.”

He was aggressive at the start. First, he drilled a 5-iron he nearly holed for an albatross on the par-5 second, leaving him a tap-in eagle. He followed that with a lofted pitch to 5 feet for birdie on No. 3, and a 40-foot birdie putt up the slope on the par-3 fourth hole as the lead began to grow.

Thomas was within two shots until he made mistakes and Johnson kept going. Johnson had two-putt birdies on the par 5s on the back nine, and he hasn’t made a bogey since the sixth hole of his second roun