Conners tied for 2nd heading into weekend at RBC Heritage 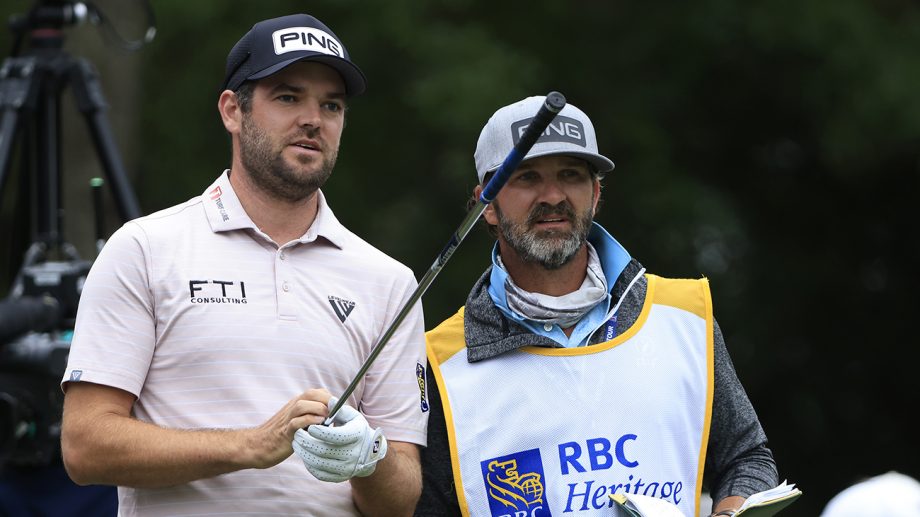 HILTON HEAD ISLAND, SOUTH CAROLINA - APRIL 16: Corey Conners of Canada talks with his caddie on the ninth tee during the second round of the RBC Heritage on April 16, 2021 at Harbour Town Golf Links in Hilton Head Island, South Carolina. (Photo by Sam Greenwood/Getty Images)
Canadian Press

Cink, 47, appears unstoppable after two amazing days. He sits at 16-under 126, five shots ahead of Canada’s Corey Conners. The previous best midway score was 129, set by Jack Nicklaus en route to victory in 1975 and matched by Phil Mickelson, who wound up third in 2002.

Conners, from Listowel, Ont., shot 64 and was 11 under. Emiliano Grillo (64) was another shot behind.

Fourth-ranked Collin Morikawa, preparing to defend his PGA Championship title next month, was tied for fourth at 9-under with Sungjae Im (65), Billy Horschel (67) and Cameron Smith, who followed his opening-round 62 with a 71.

Cink was hardly overwhelmed by the scores he posted, chalking them up to smart preparation and strong execution alongside his 24-year-old son, Reagan, who’s caddying for him.

“It doesn’t feel all that special, to be honest with you,” Cink said. “We just kind of worked our game plan.”

It was certainly unexpected. Cink hasn’t finished in the top 20 at Harbour Town in a decade, hadn’t led halfway since the Travelers Championship in 2008 and is closer to the PGA Tour Champions than his prime.

Yet Cink has had a renaissance on golf’s biggest stage this season. He won for the first time in 11 years at the Safeway Open in September and has added five top-20 finishes including a tie for 12th last week at the Masters.

Cink was down three shots to Conners when he teed off Friday.

No matter. Cink quickly erased the deficit with an eagle on the par-5 second and a birdie on No. 3. Cink moved in front with a birdie on the sixth and steadily built his margin the rest of the way, adding birdies on the 11th, 13th, 15th and 17th holes.

The veteran is two solid rounds away from adding a third plaid jacket to the two he earned in 2000 and 2004. In both of those wins, Cink came from behind on Sunday. This time he’ll need to just maintain his strong overall play.

Since Reagan became his caddie, father and son have been collaborating on strategy before tournaments.

“We call it bludgeoning and we’re just bludgeoning that plan almost to death,” the elder Cink said with a grin. “When you manage yourself around a course like that and execute, the golf courses yield.”

Conners entered the week with Masters momentum, having tied for eighth at Augusta National for his second top-10 finish there in five months. He birdied seven of his final 13 holes.

Mackenzie Hughes of Dundas, Ont., was the only other Canadian to make the weekend, shooting a 71 to reach 4 under.

Morikawa had chances, too, He had seven birdie opportunities from 20 feet or less on his final nine holes, but the only one that dropped was an 18-footer on No. 6.

“It was tough not seeing a few birdies in,” he said. “But we’ll work on a few things and be fine for the weekend.”

Smith, who was bogey-free in his opening 62, dropped three shots in a five-hole stretch on Friday.

“I think the golfing gods got a few back on me today,” the Australian said.

Top-ranked Dustin Johnson used a back-nine surge to avoid his second straight missed cut and after leaving the Masters early, returning only to slip the green jacket on new champ Hideki Matsuyama. Consecutive bogeys on the fourth and fifth holes at Harbour Town dropped him to 1-under, but four birdies coming in gave him a 67 and left him 11 shots behind Cink.

Those going home included Patrick Cantlay, Harris English, Sergio Garcia and Kevin Na, all among the top 30 in the FedEx Cup point standings this season.