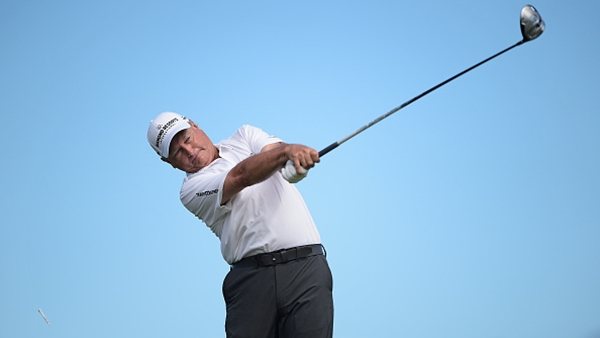 “It’s pretty special to remain friends for over 30 years after we’ve been done, 35 years actually,” Cook said. “So, it’s a great partnership. We’ve had a nice run in this event, chance to win a couple of times and it’s good to see him healthy and back. I’m happy to be back out playing. I feel like I haven’t played hardly at all this year. We kind of pulled each other along and going to enjoy the next couple days.”

Cook and Sindelar birdied the final four holes on Buffalo Ridge’s regulation Springs course in the round that was delayed an hour at the start because of rain.

“To watch the rain that happened and then one hour later be on them and the ball is going forward as it hits on the greens and the putting was fantastic,” Sindelar said. “Whether you made them or not, it wasn’t the greens, they were magnificent. … These greens held up so beautifully.”

The teams of Jay Don Blake-David Frost and Mark Brooks-John Huston were tied for second. They also opened at Buffalo Ridge.

Ian Woosnam and Sandy Lyle had the best score at the par-3 Top of the Rock course, a 7-under 47 for nine holes of modified alternate shot and nine holes of better ball.

“I quite enjoyed that format and it worked well for us,” Lyle said. “We made some birdies and birdied some of the hard holes as well, which is always a little bonus.”

They grew up near each other, with Lyle in Scotland and Woosnam in Wales.

“We’ve known each other since we were about 12,” Woosnam said. “We only lived 20 miles from each other and we’ve been playing basically in the same competitions since 12 years of age.”

Larry Nelson and Larry Fleisher led the Legends Division for players 65 and older, shooting a 47 on the par-3 course. John Bland and Graham Marsh were second after a 66 at Buffalo Ridge.

Jack Nicklaus and Gary Player were tied for third at 3 under after a 51 on the Nicklaus-designed par-3 layout.

“I think both Gary and I hit the ball reasonably well,” the 75-year-old Nicklaus said. “We did what we had to do. We didn’t make too many mistakes. We did three-putt a hole on the front nine, first nine we played, but we hit a lot of good shots.”