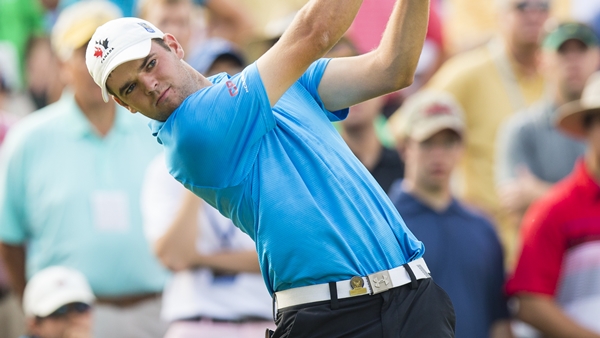 Yang jumped out to an early 2 up lead after the first two holes, but Conners continued to fight in the back-and-forth affair, winning four holes on the first 18 to sit 1 down heading into the afternoon lunch break.

Conners, a recent Kent State graduate, took advantage of a bogey by Yang to open the second round to make the match all square. They stayed even for the next four holes, until Yang birdied the par-4 6th, and followed that up with a par on the 7th, to earn a quick two-hole advantage.

As raindrops began to fall, Conners buried a 10-footer on the par-4 10th to cut the lead back to one. The rain began to pour heavily on the 11th, forcing officials to suspend play. Suspense continued to mount during the delay that lasted over an hour.

After play resumed, they remained all square until Yang birdied the par-4 14th (32nd hole) to earn his two-hole advantage back. Yang missed a short birdie putt to win on the 16th, giving Conners one last chance to make a run. That was it, however, as Yang closed out Conners on the 17th to win, 2 & 1.

Yang, a virtual unknown, joins the company of past champions Bobby Jones, Arnold Palmer, Jack Nicklaus and Tiger Woods. With the win, the San Diego state sophomore will surely improve on his no. 776 World Amateur Golf Ranking (WAGR).

Caddying for Conners was Team Canada and Kent State teammate, Taylor Pendrith (Richmond Hill, Ont.). The 2014 Monroe Invitational champion was on the bag for Conners since being eliminated in the round of 64.

Sunday’s finish marks both a female and male Canadian reaching the U.S. Amateur final in the same year, as Brooke Henderson (Smiths Falls, Ont.) placed runner-up earlier this month. That had not happened since 1966 with Gary Cowan and Marlene Streit.

Both Yang and Conners will receive exemptions into the 2015 U.S. Open and a likely invitation to the Masters – provided they remain amateurs. Additionally, Yang earned an exemption into the British Open.

Yang become the second South Korean winner of the title, following Byeong-Hun An in 2009.

Click here to listen to a our media teleconference with Conners.