Corey Conners leads heading into final round of Canadian Amateur 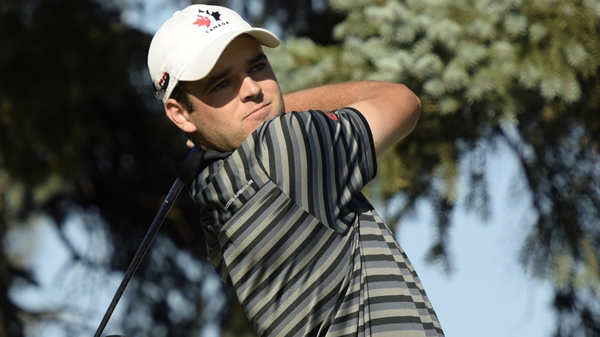 Winnipeg – Corey Conners sits in the driver’s seat one-stroke in front of the field heading into the final round of the 110th Canadian Men’s Amateur Championship.

The Listowel, Ont. native opened his third round by firing a 3-under 32 front-nine, but closed with four bogeys over his final six holes to finish with a 2-under 68. His 8-under 204 total leaves him one-stroke clear of New Mexico’s Sam Saunders.

“I’m happy with my score, just kind of disappointed with all the bogeys,” Conners said. “I’ll try to smooth things out a little bit, I don’t know I just kind of got out of my rhythm towards the end, got a little antsy or excited.”

Now leading the way, the Team Canada member will face a familiar challenge on Thursday over the final 18 holes at Elmhurst Golf and Country Club. The 22-year-old has finished no worse than third in his last three attempts at the national amateur championship title.

“I came here with the mindset that it’s my time to win and I’m just trying to do my thing out here and see what happens,” he continued. “It would definitely be nice, still another round to be played but I’ll give it my best.”

Playing alongside Conners, Saunders carded a 1-over 71 Wednesday. The Albuquerque, New Mexico native finished at 7-under 205 and cut Conners’ lead to a single stroke after his birdie putt found the bottom of the cup on the par-4 18th hole.

“That was really big. On the tee I knew I needed to play that hole well and not make a bogey because I had just bogeyed the previous two holes,” Saunders said. “It was really important for me to play a good hole and I got lucky, I sort of hit in there as close as I think you can on that one and made a great putt.”

Brian Bullington of Frankfort, Ill. finished with a 1-under 69 to grab solo third at 6-under 206. Bullington currently sits one stroke ahead of Team Canada’s Adam Svensson of Surrey, B.C. and New Zealand’s James Beale who share fourth spot at 5-under.

Complete scoring, results and pairings can be found online here.