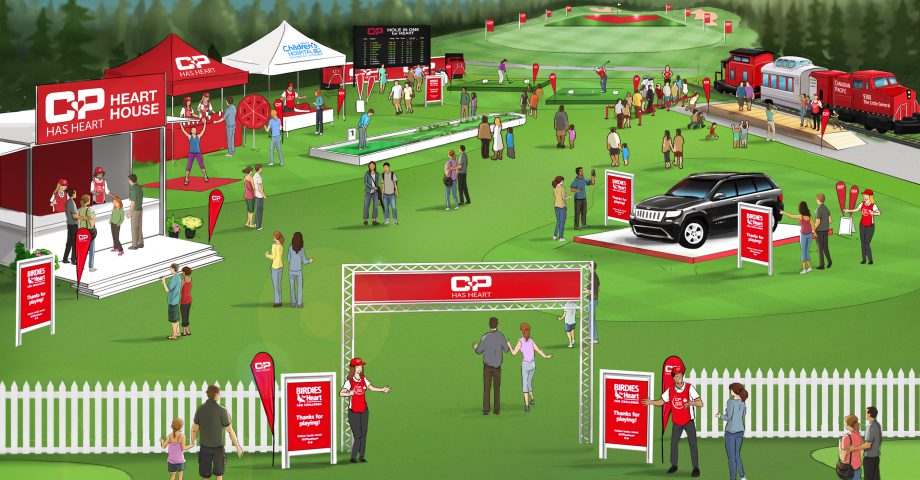 CALGARY – Golf Canada, Canadian Pacific (CP) and a host of partners have unveiled a listing of exciting events set to take place during the 2016 CP Women’s Open to be hosted at Priddis Greens Golf & Country Club from August 22 to 28.

The CP Has Heart Activity Zone will encompass several activities for spectators of all ages with funds raised going towards pediatric cardiac care and research at the Alberta Children’s Hospital. Throughout tournament week, fans can take part in the free CP Hole-in-One for Heart activity for their shot at great prizes, including a 2016 Jeep Cherokee. Participants who hit the green will have $50 donated on their behalf by CP.

Also housed within the CP Has Heart Activity Zone is the Long Putt Challenge which invites spectators to test their skills on a miniature replica of Priddis Greens’ beautiful 18th hole for a chance at a number of prizes. Funds collected from the $5 activity will be matched by CP.

The 2016 edition of CP Birdies for Heart will see CP donate $5,000 for every birdie made by a player on the 18th hole during tournament play. For $20, spectators can upgrade their tickets to enter the 18th Green CP Fan Zone to cheer on their favourite players. Premium covered seating, player meet-and-greets, giveaways and more await these fans. All funds collected will be matched by CP and donated to the Alberta Children’s Hospital.

Sure to be a fan-favourite event, WestJet’s Closest to the Pin Toss offers spectators the chance to win a flight for four. Fans can purchase mini-balls from WestJet volunteers around the course and then participate in a ball toss on the 18th green at the end of each tournament round, with all proceeds benefiting the Alberta Children’s Hospital.

The CP Women’s Open will once again celebrate Canada’s Championship with Red and White Day on Friday, August 26. Players, families and fans are invited to wear their brightest reds and whitest whites to support Canadian golf.

Located in Spectator Village, in partnership with Alberta Golf, the Golf Canada Golf Zone offers free fun activities for the whole family. Fans can pose for a picture with the CP Women’s Open trophy or the 1904 Olympic Trophy, before enjoying a free bag of popcorn and signing-up for a free Golf Canada membership.

The 2016 CP Women’s Open is more than just 72 holes of world-class golf – it is one of Canada’s most historic sporting events with a number of activities for golf and sport enthusiasts both inside and outside the ropes. Spectator Village, with its fan-friendly activities from tournament supporting partners such as AutoCanada, SourPuss Nocturne, TaylorMade, Delta Calgary South, and the Canadian Armed Forces, promises to deliver an exciting experience for fans of all ages.

A full listing of events and activities can be found here.

Golf Canada and CP are proud to offer free admission to the Canadian Pacific Women’s Open to any spectator aged 17-and-under. The free junior pass is available here. Parents of juniors can take advantage of discounted tickets by using the promotional code JUNIOR and clicking here.

As a small token of appreciation for all the valued work they do in the communities they serve, we’ve also extended a complimentary invitation to the CP Women’s Open to all Southern Alberta First Responders and their families.