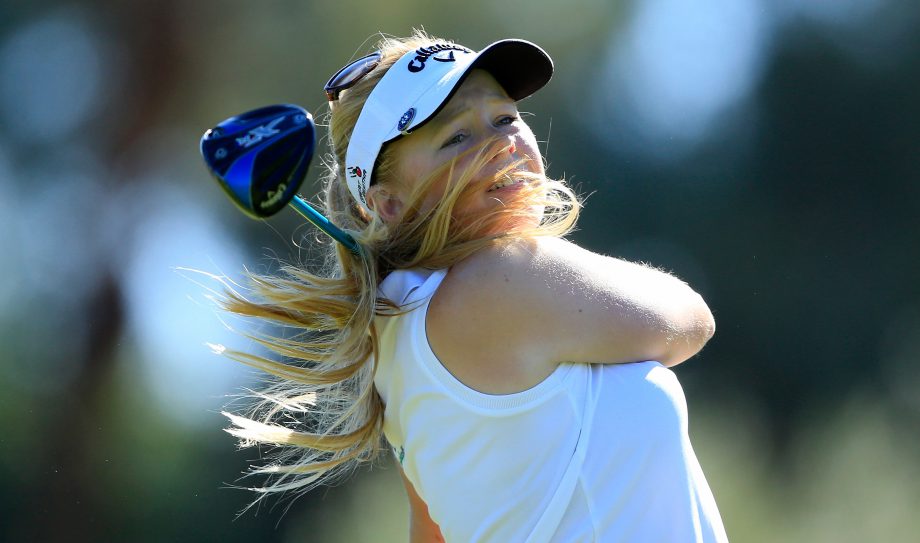 CALGARY – Stephanie Meadow didn’t mind the inclement weather conditions during the first round of the CP Women’s Open Thursday.

After a lightning delay that lasted nearly three hours, Meadow didn’t miss a beat as she birdied her final two holes to take the clubhouse lead at 6-under 66 before play was eventually suspended because of darkness.

Golfers also had to battle windy, rainy and chilly conditions, which Meadow often endured while growing up in Jordanstown, Northern Ireland.

“My caddie always jokes that when it’s windy I always play great, so I guess that’s kind of my deal,” said Meadow, who had seven birdies and one bogey on Thursday. “Being from Ireland, that’s just part of it.

“It’s nice to know that I can play in those conditions. I’ve done it a lot, even though it’s when I was little, but I’ve still done it and scored, so I know I can do it.”

Choi and Icher return to the course at 7:15 a.m. MST on Friday along with 52 other golfers to finish their rounds.

The group tied for fourth at 67 includes Lydia Ko, the Olympic silver medallist from New Zealand, who is No. 1 in the Rolex women’s world golf rankings.

“I played solid – birdied the first hole straight off the bat, so when you make a birdie in the first round on the first hole, it gives you good momentum,” said Ko, who has won the CP Women’s Open in three of the past four years including last year at The Vancouver Golf Club in Coquitlam, B.C., when she beat American Stacy Lewis in a playoff.

South Korea’s Mirim Lee held the early lead of 5 under through 13 holes when players were shuttled off the course due to lightning in the area at 11:44 a.m.

When play resumed nearly three hours later at 2:40 p.m., Lee bogeyed the 14th hole before bouncing back with a birdie on 15 and three straight pars to card a score of 67.

Mi Jung Hur, also of South Korea, then birdied the 18th hole just after Lee signed her scorecard to pull into a tie for the lead.

“I was here about seven years ago and I have good memories,” said Hur, who finished in a tie for 16th the last time the Canadian Open was held in Priddis in 2009. “But this year the conditions are super nice. The greens are super fast. I think this is the fastest greens I’ve ever had on the Tour.”

Ko finished her round of 67 a short time later, while Thailand’s Ariya Jutanugarn also moved into a tie for fourth after getting to 5 under through 14 holes before play was suspended.

Brooke Henderson, the 18-year-old from Smiths Falls, Ont. who is No. 3 in the Rolex rankings, was scheduled to tee off at 1:31 p.m., but didn’t hit her first shot until nearly three hours later.

Through 15 holes, Henderson sat in a tie for 46th spot with a host of other golfers at 1 under.

Hamilton’s Alena Sharp was one of the golfers who started in the afternoon and was also able to finish her round. She carded a score of 4-under 68 and is tied as the top Canadian with Calgary’s Jaclyn Lee, an amateur who ended the night at 4 under through 13 holes.

Maude-Aimee LeBlanc, of Sherbrooke, Que., also had a solid round in the afternoon of 3-under 69.

Toronto’s Rebecca Lee-Bentham and Jessica Wallace, of Langley, B.C., were the top Canadians after the morning round as both shot scores of 2-under 70.

“It was up and down,” said Lee-Bentham, who bogeyed her final hole. “I had two three-putts today. It’s a little frustrating because the greens are tough here but overall it was a solid round.”

Playing in her last LPGA event, Bentham will retire at the age of 24 after the tournament. She’s been playing the Symetra Tour, the official developmental golf tour of the LPGA Tour, where uncertainty and expenses have caused her to rethink her future, including a possible return to school.