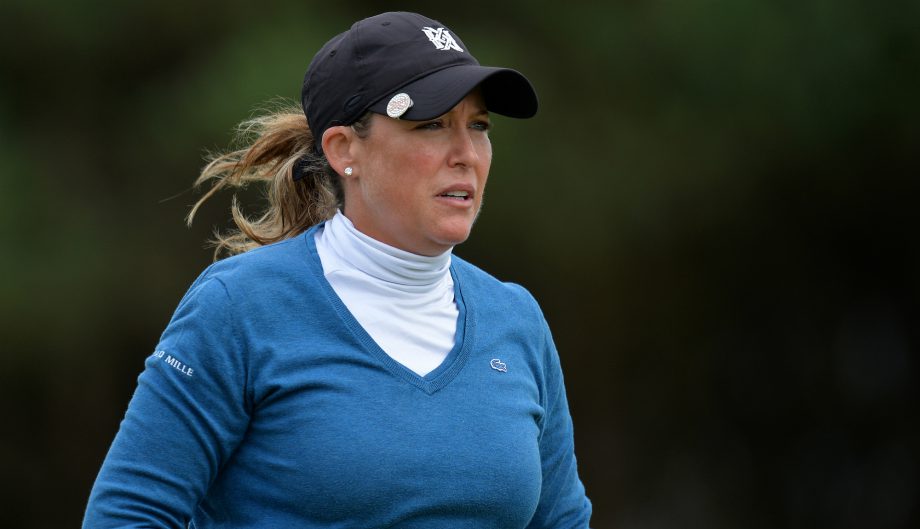 Cristie Kerr birdied three of the last six holes in strong wind Friday at Dundonald Links for a 1-over 73 and a one-stroke lead over Hall of Famer Karrie Webb in the Ladies Scottish Open.

“It was tough,” Kerr said. “I didn’t hit it that great today, but I still managed. My caddie and I managed the golf course well, and we made the recovery shots when we needed to. I’m just going to go hit a few balls and try to find the feel. It’s hard when you play back-to-back in heavy wind with the swing, but we’ll work on it.”

She won the LOTTE Championship in April in Hawaii for her 19th LPGA Tour title.

“You never know with the weather. I’m trying not to get ahead of myself in this weather,” Kerr said. “Just try to hit it pretty well and make some putts and get up-and-down sometimes, and we’ll see what happens.”

Webb, a stroke ahead of Kerr after a first-round 65, shot a 75 to drop behind. The 42-year-old Australian star had a double bogey, four bogeys and three pars.

“Well, disappointing, because I bogeyed the last two,” Webb said. “I fought really hard to be 1 over with two to go. Just a couple of bad swings and a couple of bad tee shots, really, that made it difficult to hit the greens. Disappointed with that but, obviously, if you’d have told me before I teed off yesterday, that I would be 4 under, probably would have taken it.”

“I’m very pleased.” Yoo said. “It wasn’t easy out there. It was windy. Tried to make par every hole. Didn’t try too hard. I think that worked really good.”

Lydia Ko missed the cut with rounds of 74 and 79. She has gone a full year without winning on the LPGA Tour.

“I missed like three 1-yard putts in a row,” Ko said. “I just couldn’t stroke the putt.”

“I think this is one of the windiest conditions I’ve played in,” Ko said. “Especially because it is so wide open from like 10 to 13, there’s no trees covering it, and normally when I played the British Opens, or even here a couple years ago, there was rain and that kind of softens up everything. It just makes it a touch easier than what it could be playing. But I think today was probably one of the most difficult rounds I’ve played in my career, and I think just physically, mentally.”