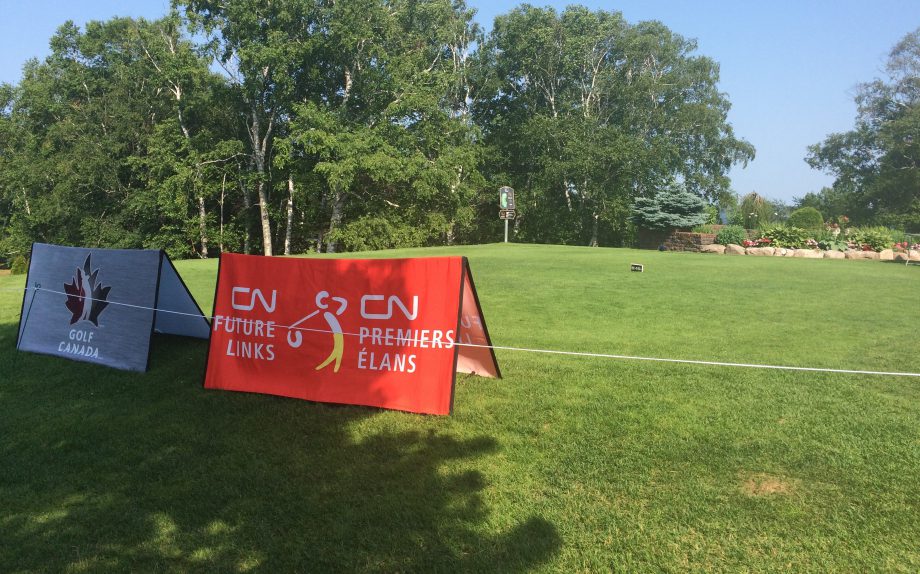 The CN Future Links Atlantic Championship opened at Gowan Brae Golf & Country Club in Bathurst, N.B., with 98 juniors in the field. At day’s end, the crowded leaderboards featured four players tied for the Junior Boys division lead at even par, while three junior girls posted 3-over for the low score in their division.

Four players opened with rounds of 72 to sit atop the Junior Boys division. Gabriel Gingras of Chelsea, Que., closed the day with two birdies to secure his share at the top. Playing in his home province, Calvin Ross of Fredericton, N.B., kept a steady pace, balancing three bogeys with three birdies. Rimouski, Que., product Julien Roy took full advantage Gowan Brae’s par 5s, notching eagles on holes 11 and 14. Michael Simms from St. John’s, Nfld., joined the trio at even par by shooting 1-under across the back nine.

One stroke back of the leaders at 1-over par are Blair Bursey from Gander, Nfld., William Gagné of Québec City, Que., and Charlottetown, P.E.I., native Ryan Legault. Tristan Vandette of Beaconsfield, Que., and Nathan Douglas of Thornhill, Ont., follow closely behind with scores of 2-over 74.

In the Junior Girls division, three players share the lead at 3-over 75. Allison Chandler, a Chester, N.S., native, highlighted her round with an eagle on hole 14 before adding a birdie on 15. St-Gabriel de Valcartier, Que., product Felixe Jacques earned her share at the top of the leaderboard with an even-par back nine. Reigning New Brunswick Junior Girls champion, Laura Jones of Moncton, N.B., claimed her place among the leaders with a strong 1-under front nine start.

Holding a tie for fourth place and signing for rounds of 5-over 77 are Claire Konning of Indian Mountain, N.B., and Oceane Jacques of St-Gabriel de Valcartier, Que.

The second round begins tomorrow with the junior girls teeing off at 7 a.m. ADT before the junior boys take to the course at 8:10 a.m. ADT.