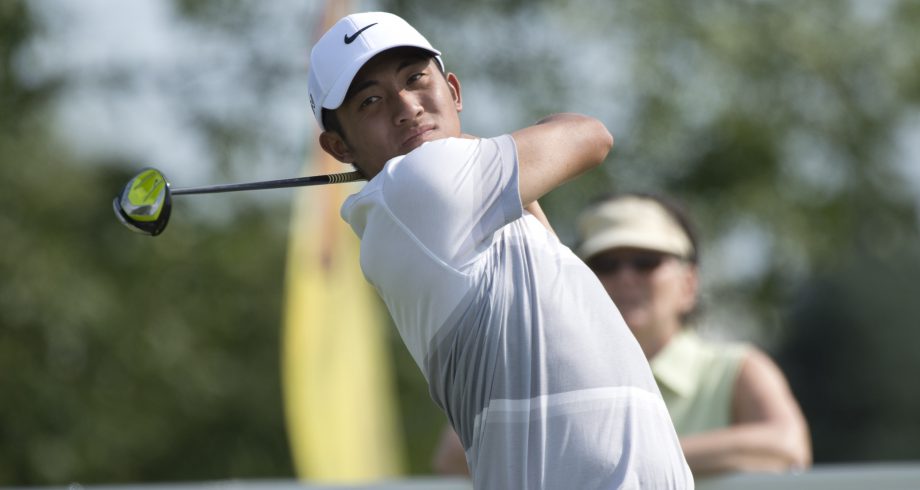 GREENVILLE, S.C. – Through 36 holes of the Web.com Tour’s BMW Charity Pro-Am presented by SYNNEX Corporation, Cheng Tsung Pan and Matt Fast sit tied for the lead at 13-under 130.

Fast entered Friday’s second round with a share of the first-round lead, following an 8-under 63 at tournament host Thornblade Club on Thursday.

At The Reserve at Lake Keowee, the former Mississippi State golfer kept his momentum intact, posting six birdies en route to a 5-under 67 – good for a 13-under 130 tally and the outright lead for all of one hour before Pan finished play.

Playing much of the second round amidst overcast skies and scattered showers, Fast shined early on the Jack Nicklaus-designed course adjacent to Lake Keowee, posting three birdies in his first five holes of the day.

His torrid start, however, gave way to a mid-round lull featuring 10 consecutive pars from No. 6 through No. 15.

“It was frustrating there for a while,” Fast said. “I was hitting it good and not getting anything out of it.”

Fast’s failure to convert birdie tries ended abruptly, and in stellar fashion, over his final three holes. Approach shots to 3 feet, 15 feet and 10 feet rounded out a closing tear for the 29-year-old, who converted each birdie try for a three-birdie finish that vaulted him from a tie for eighth into the solo lead, albeit temporarily.

“I hit 17 greens today. Just about everything was 10 to 20 feet,” said Fast after his round. “I was just trying to stay patient out there, because I wasn’t really making anything.”

Fast entered the week at No. 79 on the money list, posting just one top-25 this year – a T23 effort at last week’s Rex Hospital Open.

The 36-hole lead in Greenville marks his second of the year, dating back to a pair of opening 65s at the Chitimacha Louisiana Open presented by NACHER, which gave way to a T26 finish.

Fast will play his third course in three days on Saturday, but he insists the simplicity of approach remains the same.

“It’s a different course with different greens, but it’s the same deal,” Fast said. “Get the ball in the fairway and give yourself as many looks as you can. It’s all about getting in position for Sunday at Thornblade, because everyone knows this is a shootout.”

For Pan, Friday’s round at The Reserve at Lake Keowee was a veritable flurry of red figures, with seven birdies and a dramatic hole-out for eagle on the par-4 18th (his ninth) giving way to a second-round 63.

The former University of Washington star birdied three of his first eight holes before holing a 6-iron from 173 yards on the uphill 18th.

“I hit it really good, really pure. I hit it just like I wanted to, and then my friends on the green started yelling, ‘It’s in! It’s in!” said Pan. “It was really good to make an eagle there. It’s a tough hole, so it was nice to do something special.”

Pan birdied Nos. 1 and 2 to reach 7-under for the day before closing with a pair of birdies on Nos. 8 and 9 amidst a brief downpour and strong winds to match Fast atop the 36-hole leaderboard.

The Chinese Taipei native competed on Mackenzie Tour – PGA TOUR Canada last year, winning The Players Cup and the Cape Breton Classic on his way to a second-place finish on the season-ending Order of Merit.

The experience, he says, prepared him for his year on the Web.com Tour, where he is two days away from possibly claiming the biggest win of his young career.

“I played well last year up in Canada, winning twice. I love the feeling of winning, so I want to get back to there,” he said. “I know we have a lot of holes left, so winning is not something I’ll put in my mind right now. I just want to keep making more birdies.”

Brandon Hagy and Matt Atkins are tied for third at 12 under par, one shot back of the co-leaders.

Hagy turned professional in 2014 after a heralded career at Cal-Berkeley, where he earned consensus first-team “All America” honors as a senior, the prestigious Byron Nelson Award and was named to the U.S. Palmer Cup team that summer.

Since then, the 25-year-old has split time between the PGA TOUR and the Web.com Tour, notching three starts on the latter in 2016 alone, with a T8 at the El Bosque Mexico Championship presented by INNOVA serving as his best finish. The top-10 in Mexico marked the first of his career on the Web.com Tour, coming in his 12th start since turning professional.

“I was second in Evansville going into Saturday. I didn’t have a good weekend, but I was pretty close there,” he said, referencing the Web.com Tour’s recent United Leasing & Finance Championship. “You just have to draw on all sorts of experiences in the past – leading tournaments, winning college events, all of that type of stuff helps. It’s still just hitting a white ball around a course.”

Like Hagy, Atkins opened his week at The Reserve at Lake Keowee, posting a 6-under 66 before matching his first-round score with a follow-up 66 at The Preserve at Verdae.

The former University of South Carolina-Aiken golfer posted seven birdies against just one bogey on the day, including birdies on each of his final two holes – the par-4 eighth and the par-5 ninth.

Atkins, currently 11th on the money list, has had a breakthrough season on the Web.com Tour. The Owensboro, Kentucky native has two top-5 finishes this year, including a runner-up effort at the Club Colombia Championship presented by Claro, where he fell victim to a 72nd-hole birdie by winner Sebastian Munoz.

Drew Weaver, Julian Etulain and Jason Allred are all tied for fifth at 11 under par.

Adam Svensson was even-par on the day at Thornblade; at 5-under, the Surrey, B.C., product is T47. For the second consecutive day, Ontarians Ben Silverman (Concord) and Young Pro Squad member Mackenzie Hughes shot matching scores. The pair carded 68s and sit T90. Edmonton’s Wil Bateman matched his opening 72 and is T121.

Completing the quartet of Young Pro Squad members in the field was Toronto’s Albin Choi, who tallied a 1-under 71 at The Preserve at Verdae.