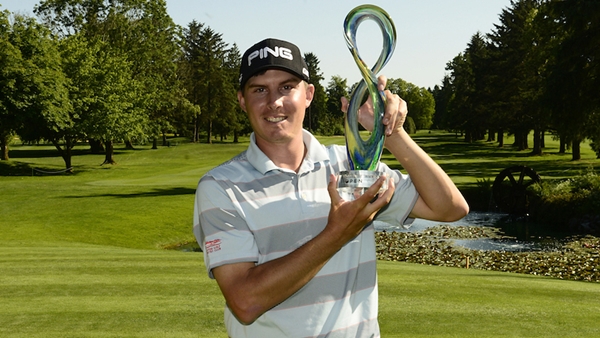 (Vancouver, BC) – With a furious back nine charge and a clutch birdie at the 72nd hole, Clarkston, Washington’s Joel Dahmen shot a final round 68 on Sunday at Point Grey Golf and Country Club to win the PC Financial Open, the first event of PGA TOUR Canada’s 2014 season.

Dahmen claimed his first victory in his five seasons on PGA TOUR Canada, narrowly edging British Columbia natives Eugene Wong and Brad Clapp by a shot. The win moves Dahmen to the top of the Order of Merit and the race for The Five, who will earn Web.com Tour status for 2014.

The 26-year old former University of Washington Husky secured the win with a two-putt birdie at the last, set up by a brilliant approach with a hybrid from 226 yards out in a fairway bunker. Dahmen said the win helped exorcise some demons from a handful of missed opportunities at winning on TOUR last year.

“I was pretty hard on myself after last year. I didn’t close on Sunday and didn’t get through Q-School, and I really thought I was going to be on the Web.com Tour this year,” said Dahmen, who earned $27,000 for the win. “I was pretty down over the winter. To put the time in and come out here and win the first event is just incredible.”

Starting the day two shots off the lead held by Des Moines, Iowa’s Jack Newman, Dahmen treaded water for the first nine holes before getting things started with a chip-in birdie on 10 (for the second consecutive day) and another birdie at the 11th. He found himself in the 18th fairway sharing the lead with his playing partner Wong, and Clapp at 15-under, and decided to play aggressively with his approach.

“I had a great lie. I thought that I had to make eagle, for sure birdie,” said Dahmen. “That’s why I went for it. Under the circumstances, it’s probably a top-10 shot of my life.”

Dahmen would go on to two-putt from 20 feet, and after Wong and Clapp both missed birdie putts inside of 10 feet to tie, he found himself in the winner’s circle for the first time on PGA TOUR Canada, with the significance of the win not far from his mind.

“The goal is to be in the top five [on the Order of Merit], but even number one is the real goal. To win early is incredible. Now I’ve got 11 events left, and basically if you win one more you have a good chance of being no. 1,” said Dahmen.

The win also sees Dahmen continue to succeed in the wake of a battle with testicular cancer in 2011. Early that year, he underwent chemotherapy treatments and successfully returned to PGA TOUR Canada later that year. He’s been healthy and playing on TOUR ever since.

“There were definitely some doubts there when I was going through chemo and laying on the couch and wondering if I’d ever get back to the golf course again,” said Dahmen. “Thankfully that’s behind me and I’m as strong as ever.”

Wong, who started the day with a bogey but fought his way back to take the outright lead late on the back nine, posted his best finish since a win at The Great Waterway Classic in 2012, while Clapp recorded his first top-10 in just his first start as a PGA TOUR Canada member.

WONG TAKES TOP CANADIAN HONOUR
With a 15-under total on the week and a T-2 finish, North Vancouver’s Eugene Wong claimed Freedom 55 Financial Canadian Player of the Week honours on Sunday. Wong won a tiebreaker over Chilliwack’s Brad Clapp by having the low round on Sunday.

Wong earns $1,500 for the award, which is presented weekly to the low Canadian on the leaderboard. The top Canadian on the Order of Merit at season’s end will earn Freedom 55 Financial Canadian Player of the Year honours and a $10,000 prize.