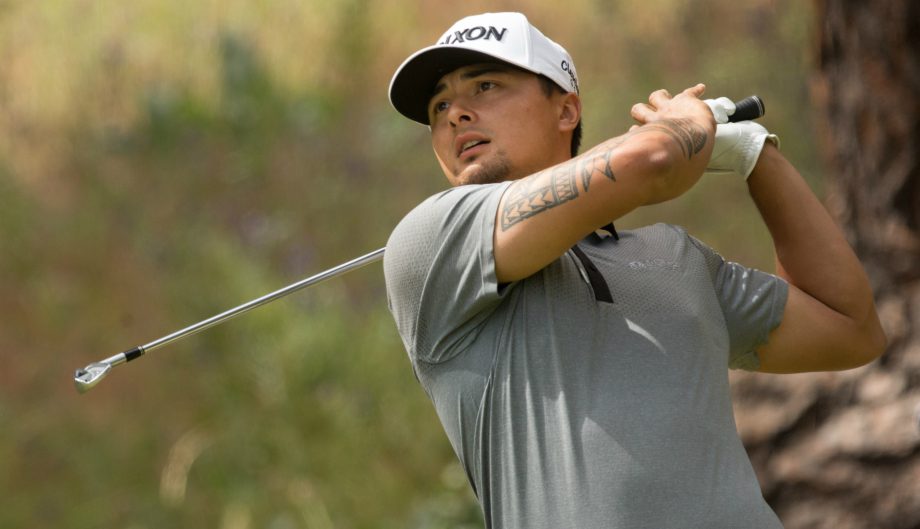 The Dalles, Oregon’s Damian Telles shot a 6-under 64 at Les Quatres Domaines Golf Club before first round play was suspended due to inclement weather at the Mackenzie Investments Open presented by Jaguar Laval, the sixth event of the 2017 Mackenzie Tour – PGA TOUR Canada season.

The 27-year old, who finished T3 at the Players Cup two weeks ago, carded six birdies and was without a bogey to post the clubhouse lead at 6-under before play was suspended due to dangerous weather in the area at 12:30 p.m.

“Every iron I hit, they were flagged. Everything was on top of the pin, so it made it easy for some short birdie putts,” said Telles. “It’s a lengthy course, and the plan was just to keep it in the fairway just so I could hit the greens and make some putts.”

Coming off his T3 finish in Winnipeg, where he played in the final group with eventual winner Kramer Hickok, the University of Idaho grad said he wanted to keep the momentum going in his third straight week of competition.

Boucherville, Quebec’s Vincent Blanchette, who gained entry into the tournament on a sponsor exemption through his performance on the Circuit Canada Pro Tour this season, was tied for low Canadian and was the low Quebecker at 4-under when play was suspended.

Can one of Quebec's very own make a splash on the #MackenzieTour?

Vincent Blanchette (-4/9) is off to a hot start. pic.twitter.com/Dbg0otBxpB

“It was very valuable, when you have people around and you’re in the mix,” said Telles of his experience at the Players Cup. “It gets you going a little bit. It was nice to know I could compete with the best of them, and I just want to keep the hammer down.”

With heavy rains accompanying Thursday’s storms, play was called for the delay shortly before 4 p.m. Round One will resume with players in position at 8 a.m. on Friday morning.

“Unfortunately, the golf course took on a lot of rain during this afternoon’s thunderstorm, and despite a tremendous effort from the grounds crew, the course became unplayable due to standing water in several areas,” said John Slater, PGA TOUR Vice President of Competitions. “We’ll aim to resume tomorrow morning with Round One and get as much of Round Two in as we can, then finish Round Two Saturday morning and make the cut before aiming to get back on track and complete Round Three on Saturday.”

27-year old Telles is making his fifth career Mackenzie Tour start this week. Telles has conditional status on the Mackenzie Tour this season after finishing T19 at the British Columbia Q-School this spring, but Monday Qualified for the GolfBC Championship and finished T49, then got into the Players Cup field on the Monday of tournament week and finished T3 to move up the season’s first re-shuffle.

"Being in the mix gets you going."

After a T3 at @theplayerscup, @D_Mon3y59 is keeping the good play going.

He opened with a 64. pic.twitter.com/4GXG9zZIXp

Telles played college golf at the University of Idaho. He ranks 19th on the 2017 Order of Merit.

One shot behind Telles was Bakersfield, California’s Matt Picanso with a 5-under 65, while Winter Springs, Florida’s Hank Lebioda was at 5-under with three holes left to complete in Round One.

Picanso finished T2 at the USA West #1 Q-School earlier this year to earn exempt status for the first eight events of the season. He finished T3 at the Players Cup two weeks ago in Winnipeg.

Lebioda is making his 14th career start on the Mackenzie Tour this week. In 2016, he finished 33rd on the Order of Merit thanks to two top-10 finishes.

The Florida State alum currently ranks sixth on the PGA TOUR Latinoamérica Order of Merit thanks to four top-10 finishes, including two runner-ups.