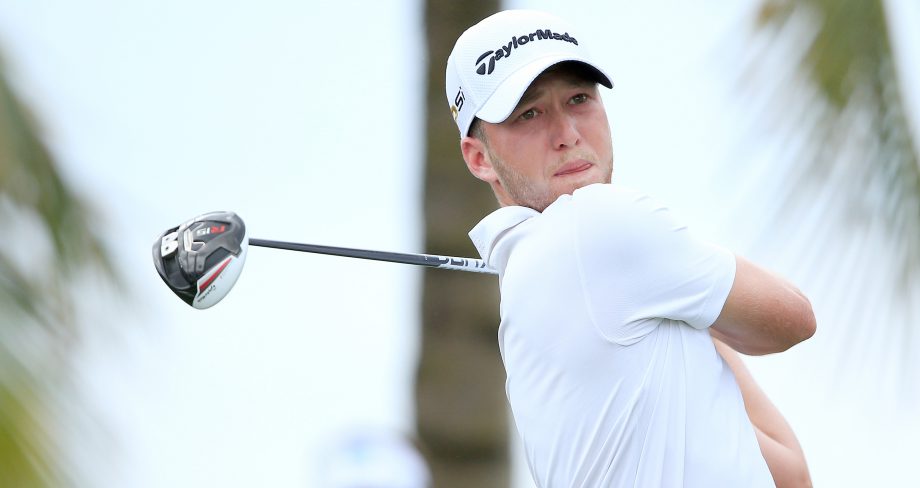 MEMPHIS, Tenn. – Daniel Berger shot a season-best 6-under 64 on Friday to take a three-stroke lead in the FedEx St. Jude Classic in Memphis, Tennessee.

Berger had six birdies in his bogey-free morning round to reach 9-under 131 at TPC Southwind, and nobody caught him atop the leaderboard. Berger has started well, despite breaking in a new driver and 3-wood after his old clubs finally cracked last week from age.

“It was a pretty easy adjustment,” Berger said. “The TaylorMade guys have been great and they found me a quick replacement, and I just got up there and started whacking it and right down the middle. I think that’s all you can ask for when you get a new driver in your hands.”

Tom Hoge, part of a three-way tie for the lead after the first round, was second after a 69. He birdied the final two holes in the next to last group.

Dustin Johnson, the 2012 champion, had a chance to catch Berger until dropping three strokes on the final two holes. Johnson finished with a 69 after wiping out four birdies and an eagle with three bogeys and a double bogey on No. 18 with what he called bad swings at the end.

“You’re going to make some bogies out here,” Johnson said. “But from the fairway you shouldn’t be making bogies. You know, just need to get a little bit better tomorrow …, but I feel like I’m driving it really well and swinging my irons really good. Got to get rid of the couple misses.”

That finish left Johnson tied with Phil Mickelson (65) and Brooks Koepka (65) at 5 under. Shawn Stefani, one of the first-round leaders, shot a 71 and was tied with eight others at 4 under, including Brian Gay (70).

Mickelson, winless since the 2013 British Open, matched his low round this year with six birdies and one bogey. He’s here fine-tuning his game for the U.S. Open next week, the one major that has eluded him in his career.

“I’m very excited that I’m in contention, that I have a good opportunity heading into the weekend,” Mickelson said. “I get to feel the pressure and excitement of having a chance to win, especially a week before the U.S. Open.”

Mickelson had his putter working with his first birdie on No. 2 the shortest on a putt of 6 feet, and he rolled in a 10-footer on No. 6. The highlight of his round came on a 31-foot birdie putt on the par-3 11th on the island green.

“It’s been a great, great year with the putter,” Mickelson said. “My critical putts from 10 feet and in are really the putts that you need to make to keep rounds going, to get up into contention. Those are the ones that can go either way, and I’ve made a lot of them this year. So, that gives me a lot of confidence heading into the treacherous greens at Oakmont.”

Seung-yul Noh, the other first-round leader, shot a 72. Defending champion Fabian Gomez (2 over) missed the cut at 1 over.

Berger’s father is the director of men’s tennis for the USTA and was head coach of the 2012 U.S. Olympic team. Berger chose golf over tennis and spent only two years at Florida State before turning pro in 2013. Now 23, the Florida native already has three top 10s this season after having six last season with this event his 15th cut made in 18 events.

He rolled in a 15-footer for birdie on No. 3, then birdied the par-3 No. 8 after hitting his tee shot from 167 yards to 4 feet. On the par-4 ninth, Berger put his second shot within 9 feet for birdie, and he birdied his third straight hole on No. 10 with a 10-footer.

He took the lead to himself with back-to-back birdies on Nos. 15 and 16. Berger hit his approach over the green at the par-5 16th but rolled in a 5-footer to become the first to go 9 under.

“Just excited to see what happens this weekend and get ready for next week,” said Berger, who will be playing at Oakmont next week.

A five-birdie, 1-under 69 from Brantford, Ont., native David Hearn has the Canadian tied for 47th.