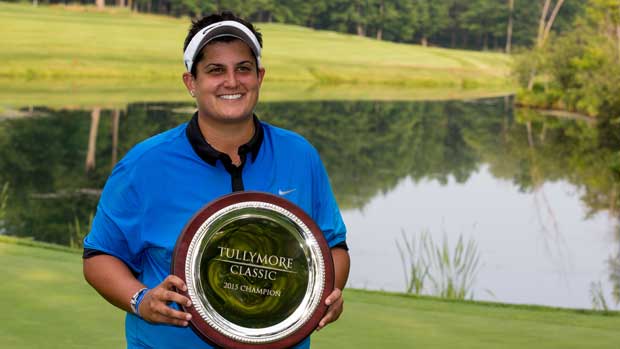 The 27-year-old former Florida Tech player closed with a 6-under 66 to finish at 16-under 200 at Tullymore Golf Club. She was born in Detroit and lived in Michigan until she was a teenager.

“I think every single thought that a golfer can have,” Iacobelli said about what she was thinking standing over her birdie putt on the par-5 18th. “Straight back and straight through. Not too hard. Not too soft. Don’t peak and pray that it goes in.”

Former UCLA player Lee Lopez and Japan’s Haruka Morita-WanyaoLu and Chie Arimura tied for second. Lopez birdied six of the last seven holes for a 62, Morita-WanyaoLu had a 67, and Arimura a 68. Arimura missed a chance to force a playoff when she left her 6-foot birdie putt short on 18.

“I almost dropped to my knees,” Iacobelli said. “When I was in the tent, I was thinking how I would play in the playoff and when her putt didn’t drop it’s almost like you snap out of competition mode immediately. It took a second, but then I was doused with a lot of water so that helped.”

“It’s one of the best feelings,” Iacobelli said. “I’ve done it in my two home states. I don’t think that I could have set up an off week any better.”

Top Canadian in the field was Sara-Maude Juneau with a final round of 4-under 68 to finish T5.