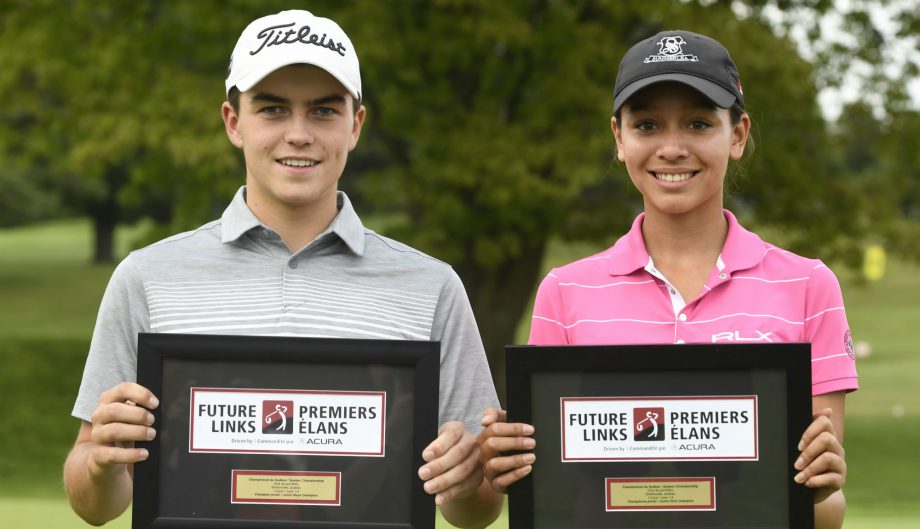 Dao finished her championship run with a 1-under-par 72 – her second under-par score of the tournament. The 16-year-old started her up-and-down final round by only recording one par on the front nine before she calmed her game down after the turn.

“My start was kind of tough,” she said, after her victory. “I didn’t drive the ball very well and it took me a couple of holes to figure my swing out. I started with a lot of bogeys and birdies, but didn’t stop attacking the pin. In the middle of my round I decided to hit my three-wood and cruised in from there.”

The move to her three-wood paid instant dividends as she recorded a par on each of the first five holes after heading to the back nine.

Ellie Szeryk, from London, Ont., maintained her second-place finish with a 4-under-par 69 – the lowest score of the tournament in the girl’s division – which saw her finish at 1-over-par for the tournament, four strokes back of Dao. She made only two bogeys on Sunday and recorded an eagle on the par-5 fifth hole.

Brigitte Thibault finished in third place at 3 over par. The Rosemere, Que., native shot a 70 on Sunday after she recorded four birdies in five holes on the back nine.

Rounding out the top six, all of-whom are advancing to the 2017 Canadian Junior Girls Championship held Aug. 1-4 at Camelot Golf & Country Club in Cumberland, Ont., are: Haley Yerxa (+5) from Ottawa, Ont., Sarah Beqaj (+9) from Toronto, Ont., and Emily Zhu (+10) from Richmond Hill, Ont.

In the boy’s division, Duquette cruised to the victory with a comfortable seven-shot lead. He was the co-leader after the first round and then captured the outright lead by carding a 6-under-par 67 in his second round. On Sunday, he shot a 2-under-par 71 to notch his third consecutive round under par.

“I was just trying to play safe today,” he said. “I wanted to hit a lot of greens and that’s what I did. I made a lot of putts in the first five holes and that really helped me through the whole day. I had a big lead after two rounds, so that made it a little bit easier.”

Finishing in second after a 3-under-par 70 was Jared Dandy from Vankleek Hill, Ont. The 18-year-old registered four birdies on Sunday paired with only one bogey – on the final hole of the tournament.
Christopher Vandette, the 15-year-old from Beaconsfield, Que., who won the Ontario Championship last week, scored a 5-under-par 68 to move him to even par for the tournament and into a tie for third with Louis-Alexandre Jobin-Colgan.

Eric Byun dropped a couple of spots after his 2-over-par 75 on Sunday. The Richmond Hill, Ont., product finished in sole possession of fifth at 1 over par for the tournament.

Three players participated in a playoff to determine the sixth golfer in the boy’s division to earn an exemption for the 2017 Canadian Junior Boys Championship held July 31 – Aug. 3 at Cataraqui Golf & Country Club in Kingston, Ont.,

Callum Davison, the event’s defending champion, outlasted Shaun Margeson, from Falls River, N.S., and Antoine Roy, from Rimouski, Que., after two playoff holes. Davison, from Duncan B.C., shot 1 under par to force the extra holes while both Margeson and Roy were 2 over on the day, allowing Davison to sneak into the final exemption spot.