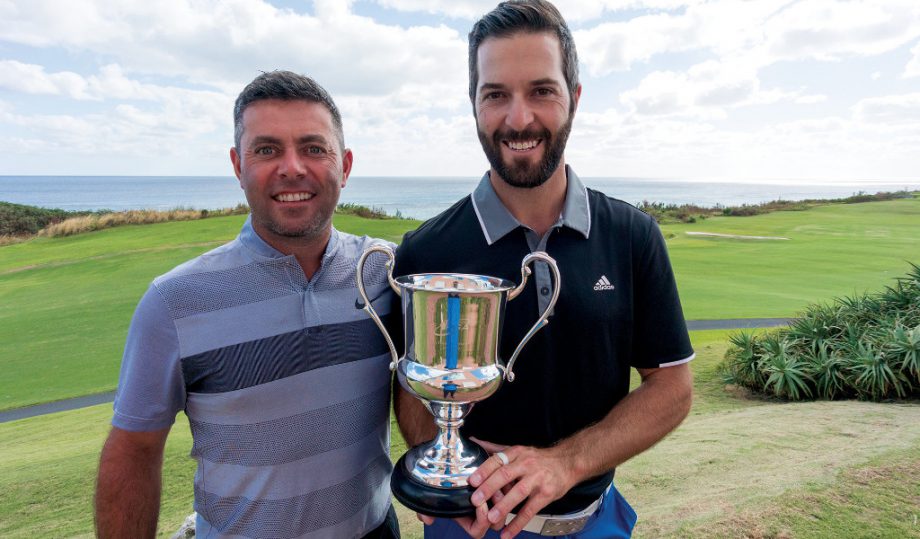 With a 15-foot birdie putt on the last hole at the Mid Ocean Club in Bermuda, the Quebec duo of Dave Levesque and Marc-Etienne Bussieres separated themselves from a logjam at the top of the Nike Golf PGA Team Championship of Canada.

“I was really trying to focus on my breathing standing over that last putt and not think about winning the trophy,” Levesque said. “I knew what had to be done because I’m a leaderboard watcher and I knew exactly what was happening with all these teams stacked up.”

“The beauty of this event is the format,” Levesque said. “You get teams contending this week you don’t usually see, plus you have powerhouse teams too and everyone is just making lots of birdies to keep things exciting.”

There were plenty of birdies Thursday at Mid Ocean with the average team score of 64.30.

With the win, Bussieres becomes a two-time PGA of Canada winner in 2016, his first coming back in June at Victoria Golf Club for the PGA Championship of Canada.

“This win is really special because Bermuda is such a wonderful place and the fact that Mid Ocean Club has hosted us all week is just incredible,” Bussieres said. “This golf course is spectacular and the food has been amazing all week too.”

Ranked the 47th best golf course outside of the United States by Golf Digest, The Mid Ocean Club was designed by world-renowned architect Charles Blair Macdonald and first opened for play in 1921. The club has played host to the PGA Grand Slam of Golf in 2007 and 2008, and has hosted such heads of state as Presidents George H.W. Bush and Dwight Eisenhower; Sir Winston Churchill, The Duke of Windsor; former Canadian Prime Minister Brian Mulroney; as well as baseball icon Babe Ruth.