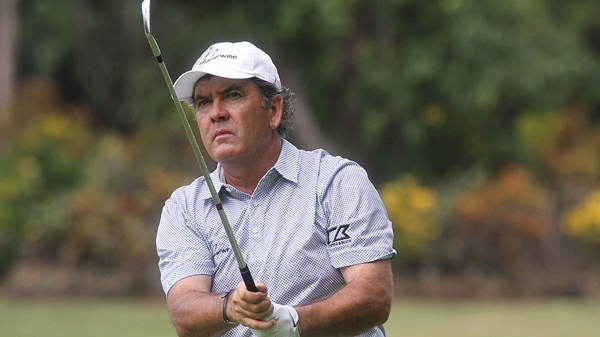 SAUCIER, Miss. – David Frost survived a one-stroke penalty on the par-3 17th and won the Mississippi Gulf Resort Classic on Sunday when Tom Lehman missed a 4-foot birdie putt on the last hole.

The 55-year-old South African finished with a 4-under 68 at Fallen Oak for a one-stroke victory over 2011 winner Lehman and second-round leader Kevin Sutherland.

Frost was penalized after the coin marking his ball on the green moved when he accidentally dropped the ball on it. That left him with a bogey and cut his lead to a stroke.

“There is some kind of rule that says in the act of marking the ball if you drop your coin. They told me I dropped the ball, which is an act of negligence and had to incur a one-stroke penalty. I was like, `You’ve got to be kidding me. Last year disqualified and this year a one-shot penalty.’

“It was frustrating. You play by the rules and luckily for me in the end it didn’t make any different and I’m happy Lehman didn’t beat me in a playoff.”

Frost, disqualified last year for moving a stone in a bunker, made a testy-5-footer for par on the final hole to get to 10-under 206, then waited as Lehman missed virtually the same putt for birdie.

After playing the front nine in 1 under with a bogey and two birdies, Frost birdied Nos. 11-13 to take the lead and made another birdie on No. 15.

“Every victory you do accomplish holds a special place,” Frost said. “This is a very special victory for me.”

Joe Durant was fourth at 8 under after a 69. Hall of Famer Colin Montgomerie and Woody Austin each shot 70s to finish at 7 under.