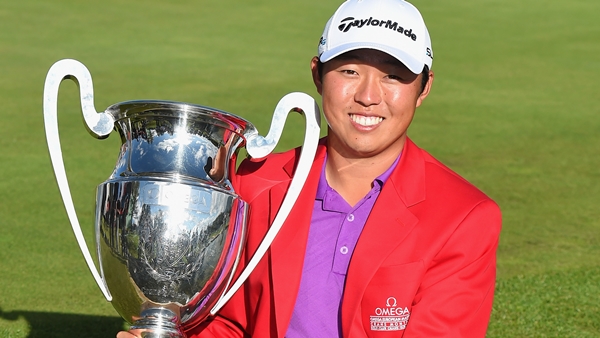 CRANS-MONTANA, Switzerland – David Lipsky won the European Masters on Sunday to put himself atop the Asian Tour money list.

Lipsky’s unorthodox par-4 on the first extra hole to beat Englishman Graeme Storm was an appropriate way for the 26-year-old Korean speaker from Los Angeles to earn a career-best (EURO)383,330 ($497,000) payday in the sunbathed Swiss Alps.

With the event co-sanctioned by the European and Asian tours since 2008, the winner’s prize lifted Lipsky clear in the money list.

“It feels great,” said Lipsky, the first winner here from Asia’s tour and the first American winner since Craig Stadler in 1985. “I’ve played well the last couple of weeks and to put it all together is really something special.”

His difficult route to the 18th green went via a fairway bunker and thick rough well short of the putting surface. An exceptional chip shot left a 2-foot putt for victory.

That strategy came after Storm, the overnight leader, sliced his tee shot wide right and could only chip out sideways before making a bogey-5.

“I was just playing percentages,” said Lipsky of his cautious second shot. “I didn’t mean to hit it in the rough. I overshot my mark by a little bit.”

Still, Lipsky had already played the 18th perfectly in regulation to earn the playoff chance.

His wedge approach shot left a tap-in to complete a final-round 65, playing in the second-last group.

Ballesteros would surely have approved of Lipsky’s adventurous 65 that included an eagle-2, six birdies and three bogeys, with a couple of 3-putts thrown in the mix.

Lipsky has taken a path less traveled in his own career, via Northwestern University, Illinois, to the Asian tour where he first won in 2012 in the Cambodian Classic.

“I have a little bit of east meets west,” said Lipsky, whose father is American and mother is from Seoul, South Korea. “I speak a little bit of Korean. It definitely helped the transition to Asia and made me feel comfortable.”

His $645,770 winnings this season are more than double those of the next player on the Asian Tour money list – Anirban Lahiri of India, who tied for 13th, seven shots back.

Victory also took Lipsky into the top 150 of the world rankings, from No. 369, and earned a European Tour exemption through 2016.

“It has really developed me as a player,” Lipsky said of the Asian circuit. “Now, with European Tour status, I’ll have to think about different scheduling.”

Another young American, Brooks Koepka, and Tyrrell Hatton of England tied for third trailing by one shot after shooting 67 and 65, respectively.

The 24-year-old Koepka, who plays on the European Tour, shared the lead until making bogey-5 at the 17th, after his tee shot found a bunker.

On another low-scoring day in the thin mountain air, a 67 from European Ryder Cup player Jamie Donaldson of Wales was only enough to place seventh, three shots back.

Two other members of Europe’s team to face the United States at Gleneagles, Scotland, were never in contention Sunday. Victor Dubuisson of France shot 72 to finish 10 shots back, and defending champion Thomas Bjorn of Denmark had a 68 to be 12 shots out.

Frenchman Romain Wattel had a hole-in-one at the 11th, one day after Storm claimed the $186,000 hybrid sports car on offer there.

Storm, seeking his first victory since 2007, stayed in front alone until the seventh hole when briefly caught in a three-way tie at 17 under with Lipsky and Englishman Tommy Fleetwood, playing in the final group with Storm and Koepka.

Koepka made his move around the turn, easily making birdie at the 633-yard (579-meter) ninth, then picking up another shot on the 10th.

A shootout between Koepka and Storm loomed when both made birdie-4s at the 16th, but the American faltered at the next hole and Lipsky’s exceptional birdie on the last forced the playoff.