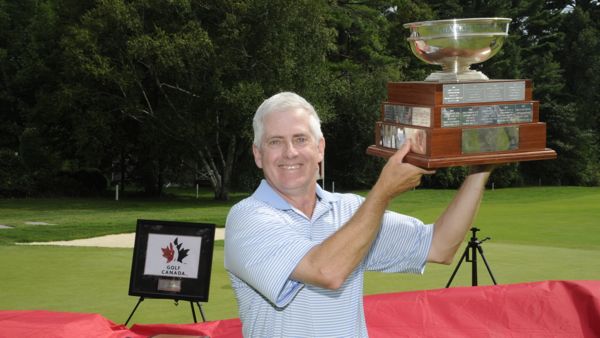 As the overnight co-leader, Schultz had been in contention from the opening day of the championship. Needing a birdie on the last to win, Schultz stuck what he called ‘the best 9-iron of his career’ from the middle of the 18th fairway to four feet.

Schultz converted the birdie putt in front of a large gallery to finish at 6-under 278 and claimed his first Canadian Men’s Senior title after a 2-under 69 on Friday.

“I was unbelievably nervous over that putt, to have a chance I thought I’d have to birdie to tie,” he said after walking off the 18th green. “I didn’t expect Chip to bogey the last hole, he’s such a good player and to come out on top is something else.”

The 1999 Canadian Mid-Amateur champion withstood a final day charge from defending champion Chip Lutz, who carded a 3-under 68 on Friday. Lutz held the outright-lead walking down the 18th fairway but failed to get up and down for par after pushing his approach shot into the deep greenside rough. The two-time champion finished at 5-under 279 for the championship.

With the victory, Schultz also earned an exemption into the USGA’s Senior Amateur Championship at Wade Hampton Golf Club in Cashiers, N.C., September 21-26.

“That’ll be fun to go and represent Canada there,” he continued. “I’ve thought about qualifying a few times but this is the best way to qualify for it, so I’m pretty happy.”