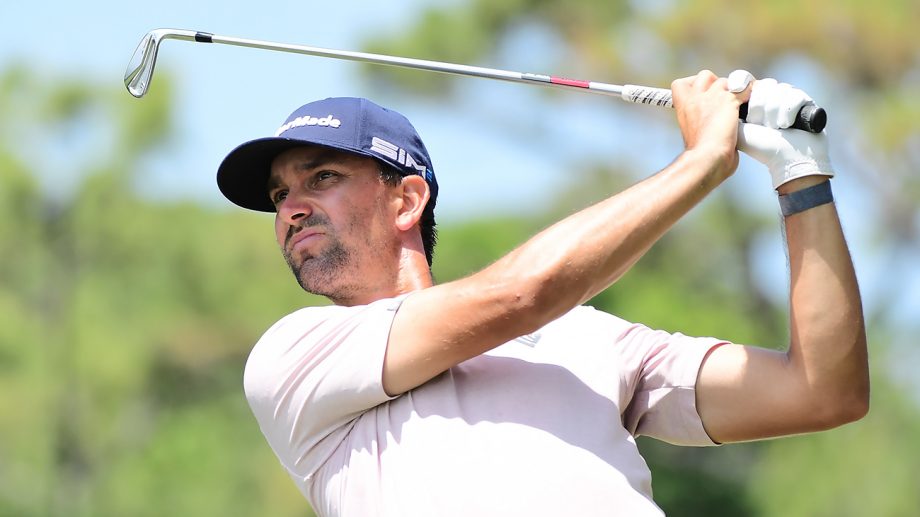 PALM HARBOR, FLORIDA - MAY 02: Michael Gligic of Canada plays a shot during the final round of the Valspar Championship on the Copperhead Course at Innisbrook Resort on May 02, 2021 in Palm Harbor, Florida. (Photo by Julio Aguilar/Getty Images)
Associated Press

DETROIT (AP) – Davis Thompson, in his third PGA Tour event as a professional, is leading the Rocket Mortgage Classic.

He’s not excited about that fact. Yet.

“Sounds good on Sunday,” Thompson said after matching a Detroit Golf Club record with a 9-under 63 to take the early first-round lead. “It’s only Thursday. I know I’ve got a long way to go.”

Brandon Hagy, Tom Lewis and Joaquin Niemann were two shots back. Seamus Power and J.J. Spaun shot 66, putting them another stroke behind the surprising leader.

Michael Gligic of Burlington, Ont., shot a 67, putting him four shots back at 5-under. Roger Sloan of Calgary is also at 5-under with three holes left to play in his first round.

Thompson is in the field as a sponsor exemption after sending an email to tournament officials, asking for a spot. The 22-year-old former University of Georgia star missed the cut last week at the Travelers Championship after tying for 35th in his pro debut at the Palmetto Championship earlier in June.

It is unlikely anyone saw his breakthrough round coming after he was a combined 6-over par in six previous starts – four as an amateur – on the PGA Tour. Thompson did show a flash of promise when he competed in the 2020 U.S. Open as an amateur, opening with a 69 before missing the cut at 7-over 147.

Thompson took advantage of favorable conditions with rain-softened greens and light wind Thursday morning at Detroit Golf Club, missing only one green and needing just 26 putts in his bogey-free round with nine birdies.

Thompson resumed his round after play was suspended due to inclement weather for three-plus hours. He tied the course record shared by Nate Lashley, who won the inaugural event in 2019, and J.T. Poston.

“I’ve played in a few pro events now, so you’ve just got to keep your emotions in check,” Thompson said. “Anything can happen. I know I’m playing well, so I’m just going to have some confidence going into (Friday) and hopefully I can play another good round.”

Players with afternoon tee times had to endure a long wait to begin playing and wind that was 5 to 10 mph stronger than it was in the morning. Twenty-seven players will finish their first round early Saturday morning before playing the second round.

Defending champion Bryson DeChambeau got off to a shaky start, a day after parting ways with caddie Tim Tucker. He replaced him for this week with Cobra-Puma Golf tour operations manager Ben Schomin, who said he was a caddie in competition for the first time.

DeChambeau, No. 6 in the world ranking, is trying to successfully defend a PGA Tour title for the first time. He had a chance two weeks ago to repeat at the U.S. Open, but went from leading the major with nine holes left to faltering and finishing in a tie for 26th.

And now, the big hitter might not make the cut and that would be a blow for him and the Detroit-based company that pays him as part of an endorsement deal.

DeChambeau missed the fairway to the right at Nos. 2 and 3, leading to bogeys. At the par-3, 184-yard ninth hole, he was short off the tee, on his chip and 10-foot putt to put another bogey on his card that dropped him to even-par 36 at the turn.

DeChambeau had nine pars on the back nine, closing with a 72 to leave him nine shots behind Thompson. He declined to be interviewed Thursday night.

Phil Mickelson entered the Rocket Mortgage Classic for the first time in the event’s three-year history and said it will be his last appearance.

Mickelson said he will not come back due to a report by The Detroit News that was published this week. The newspaper obtained federal court records from 2007, detailing how a Michigan-based bookie was accused of cheating Mickelson out of $500,000.

The 51-year-old Mickelson shot a 69, marking the sixth time he has been under par out of 11 rounds since he became the oldest major winner at the PGA Championship in May.