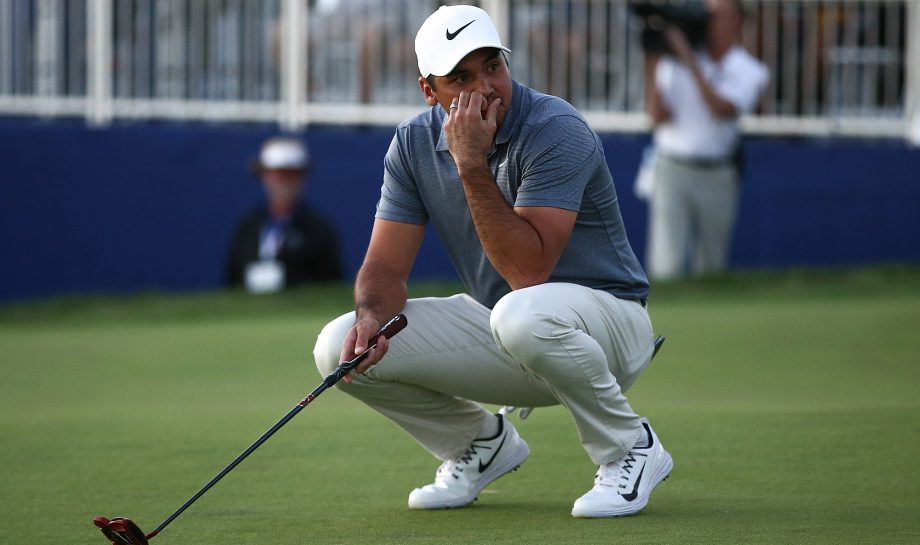 SAN DIEGO – Jason Day watched the flight of his wedge for as long as he could and had to listen to the crowd to realize he nailed it.

Alex Noren was 5 feet away from extending the playoff Sunday at the Farmers Insurance Open, a putt he could easily have missed except that the Swede could rely on experience. He had a similar putt in regulation and knew it broke off to the right.

Day and Noren went at it for 77 holes at Torrey Pines, and after five sudden-death playoff holes, it still wasn’t enough to crown a winner. They matched birdies in the dark on the par-5 18th, and then had no choice but to return Monday morning to decide the longest playoff in the 67-year history of the event.

Day has gone 20 months since his last victory.

Ryan Palmer began the playoff with them at 10-under 278. He was eliminated with a par on the 18th on the first extra hole.

Day closed with a 2-under 70. Palmer hit wedge to 2 feet for birdie for a 72 to get into the playoff. Noren, who had a one-shot lead at the start of the final round, closed with a 73.

By then, Tiger Woods was long gone.

It was the third playoff in three weeks on the PGA Tour, all of them lasting at least four holes. And while it was entertaining, thousands of fans weren’t around to see it. They left after Woods finished his round. In only his second PGA Tour event since August 2015, Woods closed with a 72 and tied for 23rd, seven shots out of the lead.

Woods said it was a mostly positive week, and it was hard to argue considering he was returning from his fourth back surgery. He at least was closer to the fairway in the final round, but hit only three fairways for the third straight day.

“I got a lot out of my rounds,” Woods said. “The short game wasn’t something I was worried about. I knew what I could, what I’ve been doing at home. That wasn’t going to be an issue. It was going to be, ‘Can I shoot low scores?’ I didn’t, but I grinded out some good rounds.”

The final hour of the tournament was a big grind.

Day, Noren, Palmer and J.B. Holmes _ the latter three in the final group _ were tied for the lead with six holes to go.

Day twice missed the green with a short iron in his hand, and one of those shots led to bogey. He didn’t make a birdie on the back nine in regulation. Noren appeared to have the steadiest game until he pulled his tee shot into the hazard on the 14th hole and did well to escape with bogey. Noren also made a pair of 7-foot par putts to stay in a share of the lead, and then he missed a 12-foot birdie putt on the 18th hole in regulation.

Palmer, trying to win for the first time in eight years, made consecutive bogeys from the bunker on No. 14 and short of the 15th green. He came up big on the 72nd hole with a wedge to 2 feet to get into the playoff.

Holmes effectively fell out of the hunt when he missed the 15th green with a wedge and took bogey, and then missed a 4-foot par putt on the 16th hole. He needed an eagle on the final hole, and took some 4 minutes trying to decide on which club to hit. He finally, curiously, decided to lay up and try to make his 3 by holing a sand wedge. He laid up in the rough and didn’t come close to holing the shot.

Noren went next and hit his fairway metal over the green, into the tunnel below the TV tower and out the other side. He took his relief, and smartly played away from the flag to keep it from running by the hole and possibly down the slope into the water, though he missed the putt.

Rahm had a chance to reach No. 1 in the world with a repeat victory at Torrey Pines. He was two shots out of the lead until going into the water and making double bogey on the 18th hole of the third round. On Sunday, the 23-year-old Spaniard fell back early and never recovered. He closed with a 77.

Day’s last victory was in May 2016 at The Players Championship when he was No. 1 in the world.

“I’ll play all day tomorrow if I need to get the win,” Day said.

Noren is a nine-time winner on the European Tour who is No. 19 in the world, trying to make his mark in America. He already has left quite an impression.