A day of rest for Mickelson at Ryder Cup 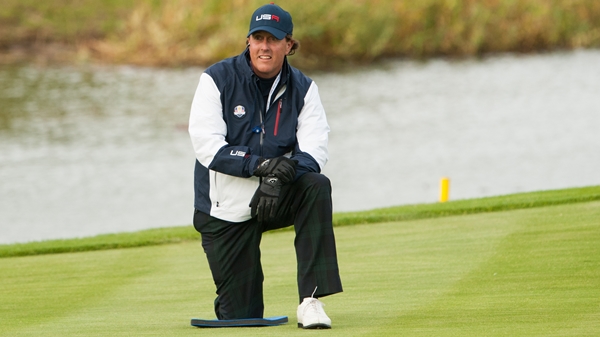 GLENEAGLES, Scotland – The tee shots were in play, and Phil Mickelson strode down the first fairway in the Ryder Cup like he has done so many times before. He was in full uniform. He wore golf shoes. And he inserted earphones to listen to the radio coverage of the matches.

He wasn’t a player on Saturday. He was a cheerleader.

For the first time in 10 appearances at the Ryder Cup – the most of any American in history – Mickelson spent an entire day without hitting a single shot. U.S. captain Tom Watson sat him out in the morning, and then he chose not to play Mickelson and Keegan Bradley in the afternoon.

The last time Mickelson played only two matches going into the final round was in 1995 at Oak Hill when he was a Ryder Cup rookie. Asked to comment as he walked down the fairway to watch, Mickelson said, “Whatever it takes to win.”

“I want our team to win, and whatever we have to do is all I care about,” he said.

When asked whose decision it was not to play, Mickelson smiled and kept walking.

Mickelson and Bradley rallied to take down Rory McIlroy and Sergio Garcia in the opening session of fourballs on Friday, but they lost badly in foursomes when Bradley couldn’t keep it in the short grass and Mickelson couldn’t make enough putts.

“They didn’t perform all that well yesterday afternoon,” Watson said. “They really wanted to go today. These are the best pairings for alternate shot.”

Watson also benched Webb Simpson for all of Saturday. Simpson was his final captain’s pick who lobbied Watson through text message the morning he was chosen.

The decision backfired on Watson when he sent out Rickie Fowler and Ryder Cup rookie Jimmy Walker for a fourth straight match Saturday afternoon. They were the only Americans to go 36 holes both days. Walker, in particular, looked weary, and he even shanked a shot on the third hole from the fairway.

Graeme McDowell and Victor Dubuisson made five birdies against no bogeys, a score that would have beaten anyone in foursomes. They were 4 up after six holes and sailed to a 5-and-4 victory.

“Jimmy Walker hit a shot that not many people in this media center would be proud of,” McDowell said. “I mean, that had to be tiredness. It had to be. I said to Victor, `Listen, let’s show these guys how energetic we are … and really try not to give them an inch.'”

“I came back up to the clubhouse and walked to him and Keegan and Webb and said they would be sitting in the afternoon,” Watson said. “I expected exactly what Phil said to me. He said, `We can get it done.’ I said, `Well, the way this golf course sets up, the four teams I put out there give us the best chance.’ He lobbied again. He text me. He said, `Give us a chance.’ I had to tell him no.”

Mickelson and Bradley formed America’s best team two years ago at Medinah when they went 3-0, asking to sit out the final session to be fresh for singles. Both wound up losing their singles matches as Europe rallied from a 10-6 deficit to win.

Mickelson, a five-time major champion, has not won a tournament since the British Open last summer at Muirfield, though he finished one shot behind McIlroy in the PGA Championship last month at Valhalla.

Bradley has gone more than two years without winning, and he had to rely on a captain’s pick to make this team. That means two of Watson’s three picks did not play a shot on Saturday. That might lead to even more second-guessing for the 65-year-old captain.

When asked if he regretted not playing Mickelson, Watson shot back, “No.”

Later, he was asked if he had any regrets at all, and whether he took into account that Fowler and Walker had gone all 18 holes and halved their previous three matches.

“When I look back on it, maybe playing the players too much would be one regret,” Watson said. “They got a little tired. And that certainly is something that I thought they could handle, and maybe I regret not understanding that they couldn’t handle it.”