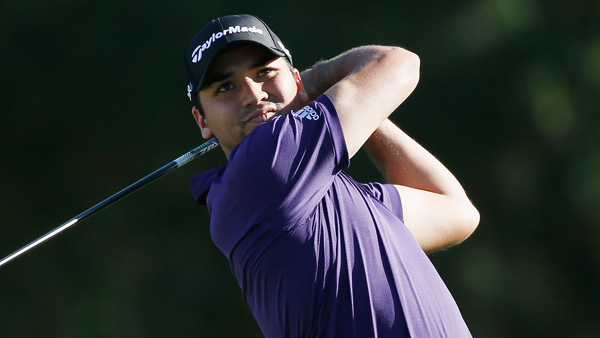 NAPLES, Fla. — After a blistering first round with teammate Cameron Tringale, Jason Day thought if they could get to 25 under, that’s “pretty good scoring.”

That’s what they did.

Day and Tringale shot an 8-under 64 on Friday in modified alternate-shot play to reach 25-under 119 and increase their lead to three strokes in the Franklin Templeton Shootout.

Day and Tringale opened with a 17-under 55 on Thursday in the scramble round at Tiburon Golf Club. The event will close Saturday with better-ball play.

Graeme McDowell and Gary Woodland were second after a 63.

Defending champions Matt Kuchar and Harris English were third at 21-under after a 66.

Day was quite aware of how Kuchar and English did it in 2013.

“These guys played well last year, 34 under is a big margin,” Day said. “So this is the format that you need to play well. You need to play this format because it’s very quick to lose your lead.”

Charles Howell III and Scott Verplank were 19 under after a 64. The teams if Keegan Bradley-Camilo Villegas (67), Billy Horschel-Ian Poulter (65) and Patrick Reed-Brandt Snedeker (65) were 18 under.

Snedeker, who shot a 10-under 62 in the alternate shot format with Davis Love III in 2012, had it going with Reed early. After a birdie on No. 10, they were 6 under for the day, 17 under for the tournament and one shot behind.

While they cooled, Day and Tringale took off and quickly built the lead back to five shots. They had an eagle on No. 6 and birdies on Nos. 3 and 8-10.

Tringale said he didn’t see a scoreboard until No. 10 but doesn’t really watch them, anyway. Day said he’s just the opposite.

“I think if there were more boards out there, I would probably be watching because I tend to watch a lot more scoreboards than Cameron,” Day said. “I like to know what I need to do. That may add some pressure.”

Day thinks players will scale back on their aggressiveness off the tee today in a chance to catch up.

“I would expect a lot of guys, even if your partner is in play, because it’s always better to have two balls in play than just one,” he said. “I would rather have two opportunities at birdies than just one.” McDowell said teams more than five or six shots behind the leaders will have a hard time catching up so he and Woodland are glad where they are.

“Two balls in play, you know, it means no one can hide,” he said. “That was kind of why I really feel like myself and Gary have a good shot tomorrow because we’re both really playing well tee to green.”

Woodland added their score could’ve been much better but they missed on four or five putts inside 10 feet that were straight up the hill. Their highlight was McDowell using his 58-degree wedge to hole out from 48 yards on No. 13.

Kuchar and English finished strong by going 4 under in the back nine. However, they’d have to go 13 under to match last year’s record mark.

Reed’s wife, Justine, watched some of the action as she recovers from a grand mal seizure Tuesday. The two shared a hug and kiss during the round.

“The doctor said everything was all clear so it was great to see her out here, it was awesome, taking a big weight off my shoulders,” Reed said.

Mike Weir and Retief Goosen were the only team to shoot over par (74) and dropped into last place at -10 for the week.