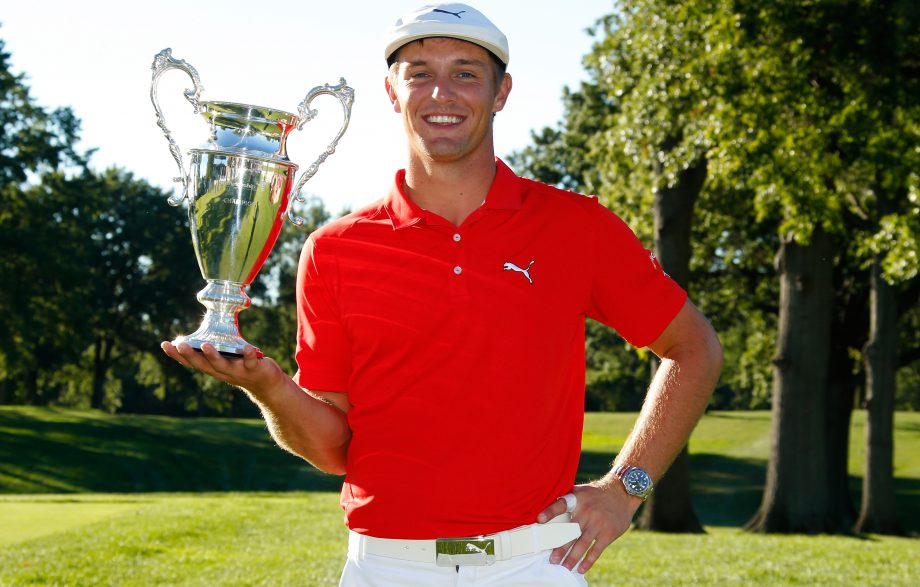 BEACHWOOD, Ohio – Bryson DeChambeau won the Web.com Tour Finals-opening DAP Championship on Sunday to wrap up a PGA Tour card for next season.

The 22-year-old former SMU player beat Andres Gonzales with a 5-foot par putt on the second hole of a playoff at Canterbury Golf Club. DeChambeau and Gonzales each birdied the 18th on the first extra trip down the par-4 hole, eliminating Nicholas Lindheim and Argentina’s Julian Etulain.

“It’s a big patience test for me, and I think I passed,” DeChambeau said.

“Not easy with the wind up, and the rough up. It was a brutal test,” DeChambeau said. “The U.S. Open definitely helped me a little bit, especially with how long the rough was, and being comfortable with hitting wedge shots around the greens. But the good thing is the greens were receptive when hitting irons in so you were really able to throw darts at pins.”

DeChambeau earned $180,000. The 2015 NCAA and U.S. Amateur champion got into the field as a non-member with enough PGA Tour money to have placed in the top 200 in the FedEx Cup had he been eligible.

The four-event series features the top 75 players from the Web.com Tour money list, Nos. 126-200 in the PGA Tour’s FedEx Cup standings and some non-members such as DeChambeau. The top 25 players on the Web.com Tour regular-season money list earned PGA Tour cards. They are competing against each other for tour priority, with regular-season earnings counting in their totals. The other players are fighting for 25 cards based on series earnings .

Playing with an unusual iron configuration with 4-iron to lob wedge cut to standard 7-iron length, DeChambeau birdied the par-5 16th, three-putted for bogey on the long par-3 17th and closed with a par to get into the playoff.

“For some reason I’m able to just let that go and focus,” DeChambeau said “Really what that does is allow me to just say ok, it’s gone, it’s in the past, and move forward. I don’t hold it up or build it in me. I just ease out of it. I think that’s the most important thing that I stuck with it. Eventually I got a couple to fall, one on 16, and unfortunately on 17 I three putted. But on 18 I clutched up. ”

Gonzalez earned $74,667 to also wrap up a tour card after finishing 154th in the FedEx Cup standings.

“Main objective accomplished,” Gonzalez said. “It’s only disappointing when you come this close. I had some good looks coming down. I played really solid the whole week. I kept the ball in front of me a lot, which is what you need to do here. … I’m pleased. I’m excited. I’m sure I’ll be more excited after I get losing out of my mind.”