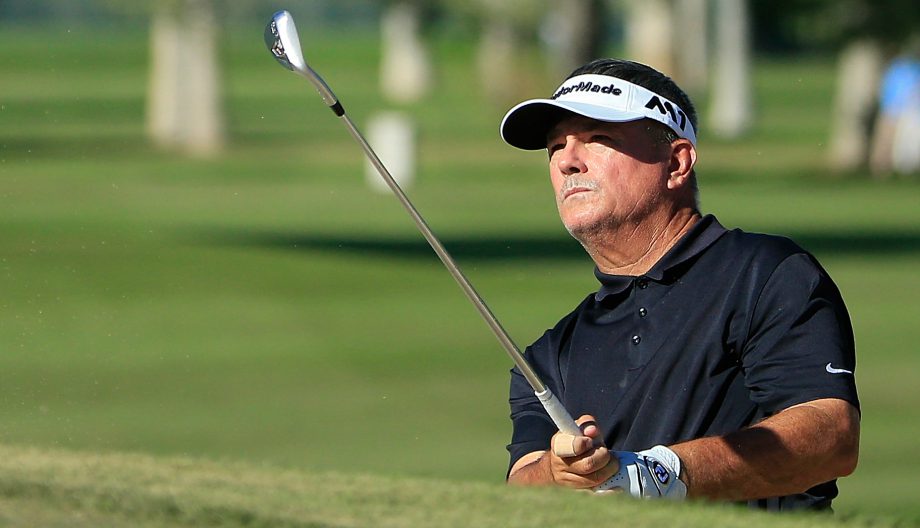 Goydos shot a 5-under 66 to reach 12-under 130 at Phoenix Country Club, the tree-lined course hosting its first tour event since the Phoenix Open left for TPC Scottsdale in 1988.

“This golf course doesn’t hide where it wants you to hit the ball,” Goydos said. “You kind of follow the line of the trees and you’ll be OK. I mean, you need to drive it good.”

Lee Janzen was second after a 67. The two-time U.S. Open champion birdied the par-5 18th playing alongside Goydos in the final group.

“I hit some wild shots, but I just keep hoping I have a swing and some sort of opening and I’ll figure out a way to get it near the green and make a par.”

“I get in there, I want to hit a fast one, I looked at the hole and all I saw was the sun,” Goydos said. “I should have backed away and I didn’t. … You talk about the difference between a Langer or a Watson or a Woods or a Spieth and a Goydos is that I was too quick there. I should have stopped.”

Bernhard Langer, trying to sweep the three playoff events and win the Charles Schwab Cup season points title for the fourth straight year and fifth overall, was tied for 22nd at 3 under after a 68.

Kevin Sutherland and former Arizona State player Billy Mayfair were 10 under. Sutherland eagled the 18th for a 63, the best round of the week. Mayfair shot 65.

Goydos won last year at Desert Mountain in Scottdale, about 35 miles northeast of the new venue just north of downtown Phoenix. He’s trying to join Mike Hill (1990-91), Jim Thorpe (2006-07) and John Cook (2009-10) as the only players to win the season finale in consecutive years.

The two-time PGA Tour winner took the 3M Championship in Minnesota in August – shooting a tour season-best 60 in the second round – for his fifth senior title.

Sutherland hit a 4-iron from 231 yards to 5 feet to set up the closing eagle.

“That was the best 4-iron I’ve hit in a while,” Sutherland said.

Winless on the senior tour, Sutherland entered the week fifth in the Charles Schwab Cup season points standings, the last spot where the player has to only win the tournament to top the yearlong competition.

“I played good, got myself back in the tournament,” Sutherland said. “But you’re going to have to go out and probably shoot something similar to that tomorrow.”

The only player to shoot 59 in senior tour history, the 53-year-old Sutherland has 14 top-10 finishes this season, finishing second three times and third twice. His lone PGA Tour victory came in 2002 at La Costa in the Accenture Match Play Championship.

“I had a lot of really good putts that just didn’t go in,” McCarron said. “They’re right on the edge all day long. So it was one of those days that could have been really, really low. But I’ve got a chance tomorrow. I’ve got one round left, and if you had told me at the start of the year you have one round left to win the Schwab Cup, I’d would say what a wonderful opportunity.”

Langer opened the playoffs with victories in the Dominion Energy Charity Classic in Richmond, Virginia, and took the PowerShares QQQ Championship two weeks ago in Thousand Oaks, California.

The 60-year-old Geman won three of the tour’s five majors this season and has a tour-best seven victories. He has never won the season-ending event, finishing in the top 10 seven times in nine starts.