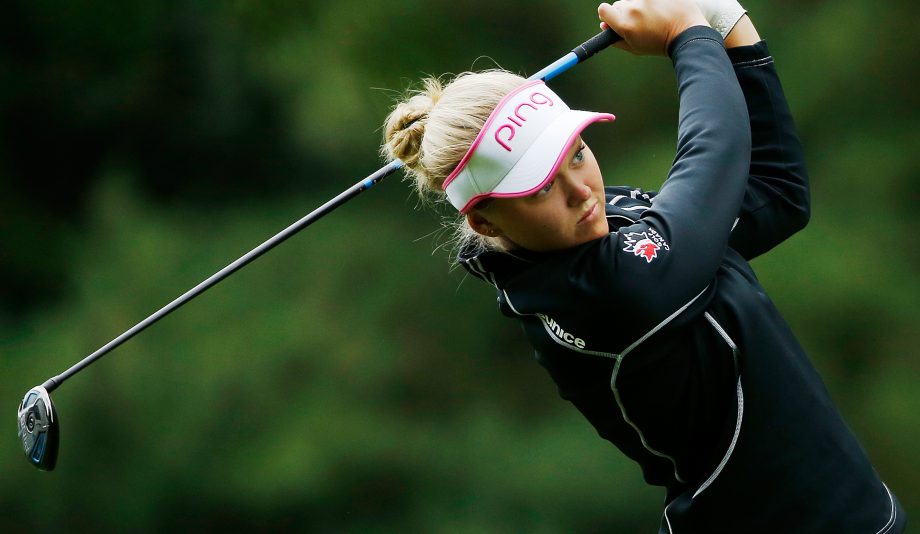 PORTLAND, Ore. – Defending champion Brooke Henderson shot a 7-under 65 on Thursday to take a two-stroke lead after the opening round of the LPGA Cambia Portland Classic on Thursday.

Picking up where she left off from a year ago, when Henderson shot a 21-under 267 to win her first LPGA tournament, the 18-year-old from Smiths Falls, Ont., hit 16 greens and made nine birdies on a warm, cloudless day at the 6,476-yard Columbia Edgewater course.

Henderson said a combination of factors allows her to feel at home at Columbia Edgewater.

“I love tree-lined courses, and that’s very much what this course is. With the bent grass, which is kind of what I grew up on, I really like it. It suits my eye,” Henderson said. “Then winning here, that gives me those extra vibes and adrenaline, which I think will help as the week goes on. This golf course, being out here in the Northwest, in the beautiful temperature, I like wearing long sleeves and pants.”

Runas, whose best career finish is a tie for 25th, and Uribe are looking for their first LPGA victories. Stanford lost in a playoff in the 2003 U.S. Women’s Open at Pumpkin Ridge, which has previously played host to the Portland Classic. Uribe and Stanford shot bogey-free rounds.

Stanford, who tied for fourth last week in Arkansas, is somewhat of a surprise among the leaders. She hasn’t had much success at the Portland Classic, her best finish a tie for eighth in 12 tries.

“Poana greens are usually not very friendly to me. It’s nice to watch the ball go in the hole here. I haven’t always played well here, so I tried to just put that on the back burner and see if I could carry it over from last week, and it did,” Stanford said.

Pettersen is a two-time Portland winner, claiming the 2011 and 2013 tournaments.

Henderson, starting early in the morning on the back nine, was only 1-under through seven holes. But she birdied three of the next four holes, then finished on fire while playing the front nine, making consecutive birdies on holes 5 through 8. Henderson just missed a fifth consecutive birdie, sliding a 15-foot putt past the left side of the hole at the par-4 ninth.

It was a bogey at the par-4, 391-yard fourth that helped ignite Henderson’s string of four consecutive birdies.

“That was a dumb hole … a hole with my length I could have taken advantage of. The bogey bothered me a little. I knew I had two par-5s coming up, so I tried to focus on them,” Henderson said.

In her last six rounds at Columbia-Edgewater, counting last year’s Monday qualifier, Henderson is 32-under par, all six rounds in the 60s.

Last year, Henderson won the Portland Classic by eight strokes, and became the third youngest champion in LPGA Tour history. Since winning her maiden event, Henderson has soared to become No. 2 ranked, and two weeks ago won the Women’s PGA Championship.

Henderson is attempting to become Portland’s first back-to-back champion since Annika Sorenstam won the 2002 and 2003 tournaments.

The Portland Classic is normally played in late August, but moved up because the LPGA is taking three weeks off for the Olympics. The Portland stop is typically popular among the tour’s best players, but with the U.S. Open scheduled for next week in California, only 13 of the world’s top 50 entered this year.

The Portland Classic is the LPGA Tour’s longest-running non-major, now in its 45th year. The purse is $1.3 million, with $195,000 going to the winner.