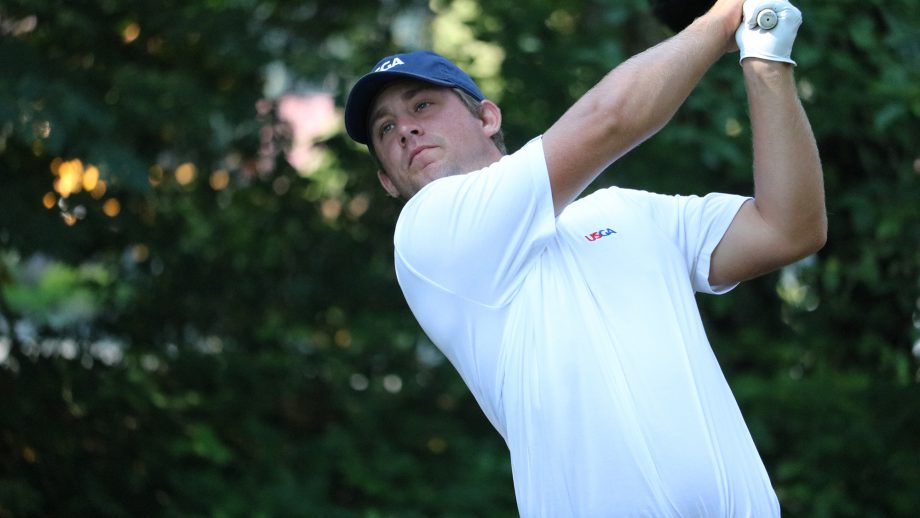 DUNCAN, B.C. – American Zach Bauchou fought the heat with a 4-under-par 67 in Wednesday’s third round of the 114th Canadian Men’s Amateur Championship to hold a two-stroke lead at Duncan Meadows.

The 22-year-old Forest, Va., product sits at 13 under par for the tournament and has held the lead through the first three rounds. Bauchou, a junior at Oklahoma State, felt he left a lot of strokes on the course today.

“I didn’t really feel like I played that great today. I just didn’t hit it close to the hole so I didn’t have many great birdie looks,” said Bauchou, who was on his way to the practice range. “I was fortunate to only make one bogey which minimizes the damage a lot—I just need to play better tomorrow.”

Bauchou’s motivation comes from many sources, one of which included Oklahoma State teammate Sam Stevens, who now sits in a tie for third at 8 under. The pair shared a short exchange at the 17th tee to compare scores.

“I was asking Sam what he was at and he was 6 under,” smiled Bauchou. “So I was really gearing up to birdie the last two holes but I didn’t do that so that was disappointing. You know, I think I’m in a really good frame of mind to have a good day tomorrow.”

Trailing Bauchou is fellow American Philip Knowles, who shot a 64 to tie the course record (set this week by Australian Justin Warren). The Jacksonville, Fla., native sits at 11 under in solo second, narrowing Bauchou’s 36-hole lead by one stroke.

In 2017, Bauchou rallied from behind in the final round to win the title. On Thursday, he looks to close it out playing with lead. He tees off at 9:31 a.m. PT alongside Knowles and Gorbahn, the current low Canadian.

Team Canada graduate and NHL referee Garrett Rank of Elmira, Ont., sits in 6th place at 7 under for the tournament.