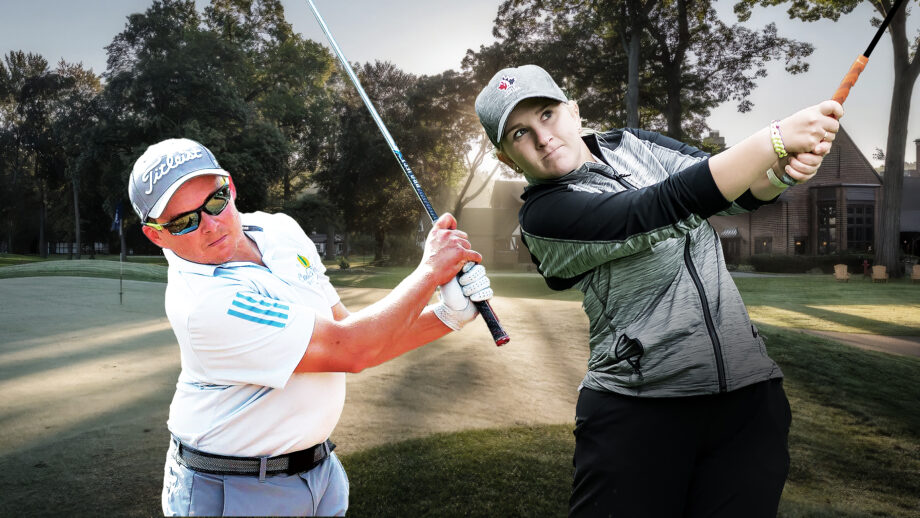 Windsor, Ont. – Defending champions Natasha Stasiuk of Oakville, Ont. and Kurtis Barkley of Williamsburg, Ont. have jumped out to an early-opening lead at the second playing of Canadian All Abilities Championship, presented by BDO and hosted at the Essex Golf and Country Club in Windsor, Ont.

In the Women’s Gross Stroke Play Competition, Stasiuk, a member of Heron Point Golf Links who won the 2021 Women’s Gross Stroke Play title at the Canadian All Abilities Championship, shot a 13-over 84 and heads into Wednesday’s final round with a seven-shot lead over Tess Trojan of St. Catharines. Earlier this year Stasiuk won the 2022 Ontario Disability Championship.

In the Men’s Gross Stroke Play Competition, Barkley, currently ranked no. 6 on the World Ranking for Golfers with Disabilities (WR4GWD), fired an opening-round 4-under 67 to take a two-shot lead into Wednesday’s final round. A member of Cedar Glen Golf Course, Barkley also won the 2022 Ontario Disability Championship in July.

Chris Willis of Aurora, Ont. sits alone in second at 2-under 69 while Jesse Florkowski of Medicine Hat, Alta. (2-over 73), local product Kevin Delaney of Windsor (5-over 76) and Michael Pisaric (6-over 77) round out the top-five.

In the Men’s Net Stableford competition, Randall Mackus, a member of Prince George Golf and Country Club, earned 42 total stableford points Tuesday and leads Delaney by two points. Vic McLelland of High River, Alta. is third with 39 points with Pisaric is fourth with 37 points. Barkley and Willis round out the top-five with 36 points each.

The national golf championship is being contested September 13-14 as a 36-hole competition and features players from Canada and the United States with neurological, intellectual, sensory, and physical impairments. First held in 2021 at Humber Valley Golf Course, the competition supports Golf Canada’s commitment to create a more inclusive and respectful sport environment across the Canadian golf community.

Golf Canada has worked with several partner organizations on the Canadian All Abilities Championship including Special Olympics Canada, Blind Golf Canada, Canadian Amputee Golf Association, Emeritus Golf, The R&A, EDGA, and others to ensure an inclusive and fair competition is provided to the athletes.

Click here for opening-round results from the 2022 Canadian All Abilities Championship.