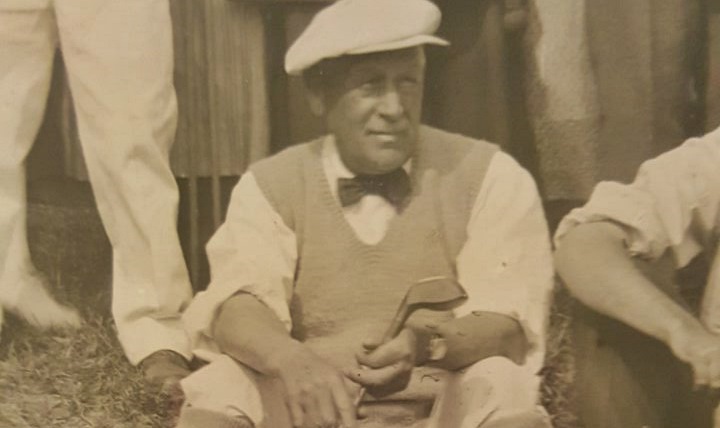 As one of the country’s most notable amateur golfers, Lyon had signed on as a member of the Board of Directors, shareholder and Vice-President of Thornhill G&CC when the club opened in 1922 and had worked alongside President F. L. Ratcliff and architect Stanley Thompson to build and establish a parkland gem with an 18-hole for men and a nine-hole ladies course that have stood the test of time for nearly a century.

It would be amazing to turn back the clock and have a conversation with Lyon about his thoughts on the course, but on the official Opening Day, June 15th, 1922, newspaper reports tell us that he shared some glowing remarks with several hundred members who showed up to watch a nine-hole exhibition match played between Lyon and Frank Thompson alongside Club Secretary Bob Gray and Head Professional Norman Bell.

“Lyon was an Olympic gold medalist in golf, the greatest Canadian amateur golfer of his time and a sporting legend who played a key role in the initial development and success of Thornhill G&CC,” says Club President, Adrian Hartog. “Lost in time is how long Lyon remained at Thornhill, but having him as part of our original founders is noteworthy in Canadian golf history and a fact that members should know and appreciate.”

You will find him included in a magnificent framed black and white photo that was taken on Opening Day that now hangs in its full glory in the Stanley Thompson Lounge and there’s a story from the Toronto Telegram that has also been framed and hangs in the family washroom near the fitness center that is a good read!

Lyon and Thompson were also involved in the development of the first public course in Toronto in 1920 – Humber Valley Golf Club – designed by Stanley Thompson – that closed in 1954 to make way for a sewage treatment plant. They would also go on to work together at St. George’s G&CC in similar roles.

“Although he should be considered one of Canada’s greatest sporting heroes, I think that until golf returned to the Olympic stage you could argue that the legacy of George S. Lyon was little known in this country. I think this has certainly changed leading up to the Summer Games in Rio as he is recognized as the defending champion. It’s getting a lot of press around the world,” says Scott Simmons, CEO of Golf Canada.

Lyon is once again in the headlines as golf is welcomed back to the Summer Olympic Games for the first time since 1904. That’s when Lyon, who was 46 years of age at the time, travelled to St. Louis, Missouri with two other members from Lambton G&CC and triumphed at the Glen Echo Club over the reigning U.S. Amateur champ, 20-year-old Chandler Egan.

Lyon was born in 1858 in the village of Richmond, near Ottawa. He relocated to Toronto, where he raised a family of five children with his wife Annette and sold insurance for Sun Insurance Office for 37 years before retiring in 1931. He also joined the Queen’s Own Rifles of Canada in 1881, as a reservist, and served through the North-West Rebellion of 1885. He played football, hockey and tennis growing up and even held the Canadian pole vault record at the age of 18. He was also a well-known cricket player and curler, who has his name on the Canada Life Trophy and was an Ontario Tankard winner. He got his start in golf at Rosedale Golf Club, but left there to be a long-time member at Lambton Golf and Country Club, as well as The Toronto Golf Club for a few years. He’d win the Canadian Amateur title eight times, among other titles, before winning gold at the Olympics. He said he played the best golf of his life finishing runner-up in the 1906 U.S Amateur. Lyon died in May of 1938 after suffering a stroke.

The very first George S. Lyon Team Championship was played in 1931 and a team from Royal York Golf Club consisting of William J. Thompson, D.W. Palmer, Hugh S. Reid and Lyon himself finished in a tie with a team from Lambton G&CC with a score of 335. It was last won by a team from Thornhill back in 1954 including; R.E. Dale, T. Hogarth, E.A. Nerlich and J Wagstaff.

In his book, Golf in Canada – A History, Canadian Golf Hall of Fame member, James Barclay wrote, “His colourful excursions in such events (the Olympics) caused pages to be written in the Canadian sporting sheets, helping to bring golf to the attention of thousands who had never heard of the game. George Lyon caught the interest and imagination of all. He is remembered as a man who played golf for the sheer enjoyment of it, as one who lived to win with deep and untrammeled sincerity, but who knew how to win graciously, how to lose gracefully. Above all, he was a man who hewed to the written and unwritten rules of the game.”

So when you turn on the television in August to watch golf’s return to the Olympics don’t forget that George S. Lyon played both a large role in the Olympic movement, as well as the creation of what is now The Thornhill Club.