DeLaet trails Steele as Silverado begins to show some teeth 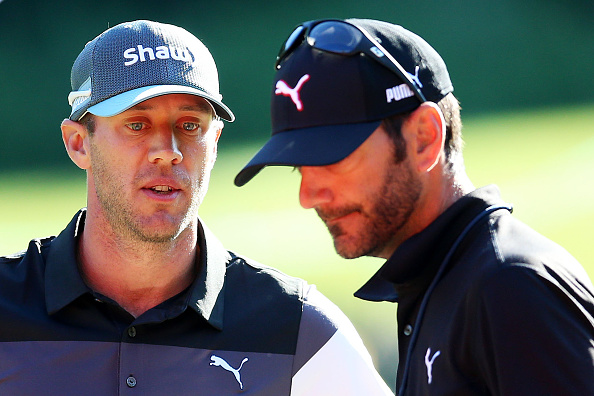 NAPA, Calif. – Brendan Steele felt no different about his game Friday than when he tied the course record with a 63 in his opening round at the Frys.com Open. The difference was seven shots. What didn’t change was his position on the leaderboard.

Steele had to settle for pars on the closing three holes at Silverado that tend to produce birdies, giving him a 2-under 70 on a course that was getting firmer and featured much stronger pin positions.

All that mattered was a two-shot lead going into the weekend.

“I expected today to be tough,” said Steele, who was at 11-under 133. “And it’s always tough to follow up a round like yesterday with anything even under par. I think we’ve seen guys over the years follow 63 up usually with something around par. If you can go lower than that, you probably have a pretty good-sized lead.”

One thing didn’t change for Rory McIlroy. He can’t seem to make a putt.

McIlroy, the No. 3 player in the world, shot 71 and was six shots behind. Considering how many putts he missed, it felt like an even greater margin.

“Not to be able to break 70 today is quite disappointing,” McIlroy said.

His only two birdies were on par 5s where he missed putts for eagles. And he ended his round by missing a birdie putt from just outside 12 feet, a familiar sight for him over two days at Silverado.

“I think it’s more mental than anything else,” McIlroy said. “Whenever you don’t see anything go in, it makes it harder and harder each and every hole that goes by. … I don’t expect to hole everything, but I expect to hole more than I am at the moment.”

And with that, he signed a few autographs and headed straight for the practice green.

With tougher pins, Silverado played about one shot more difficult. It was just as tough to get some separation.

The cut was set at 2-under 142, and a 54-hole cut was in play for Saturday because 81 players advanced to the weekend. That group includes Brandt Snedeker, who birdied his last two holes to make it on the number.

Missing putts was a familiar sight for everyone.

“I actually felt like from tee-to-green, I played way better than yesterday, to be honest,” said Vegas, who followed his 64 with a 71. “I just couldn’t buy any putts.”

This is a big week for Vegas, who received a sponsor’s exemption after losing his card and needs to make the most of what limited tournaments he can play this year.

And it’s a big start for Varner, who joins Tiger Woods as the only players of black heritage on the PGA Tour this year. Varner made back-to-back birdies and was closing in on the lead when he had to settle for four straight pars at the end. It was nearly dark when Varner played his last hole, though he never considered coming back to finish Saturday morning.

“Six hours of sleep is way more important than one putt, I think,” Varner said. “I’m staying in American Canyon. It says it’s 25 minutes, but it’s yet to take me 25 minutes to get back. I’m going to get it tomorrow. I’m pretty excited.”

Steele opened his round with a birdie, which he thought might be a sign of another low score. He made two birdies in three holes to start his back nine and was thinking he might get a chance to pull away at 12 under, especially with a pair of par 5s and a short par 4 among the three closing holes.

Plus, he ended that side with five straight birdies Thursday. It just didn’t quite work out that way.

“So those last three you think you can score on were kind of a struggle,” he said.

But he wasn’t alone. Justin Thomas, coming off a strong rookie season and a 66 to start the new season, caught Steele with a 20-foot birdie putt at the turn and had his hopes ruined by missing the green at No. 4 with a wedge, and then taking double bogey on No. 6. A birdie on the last hole for a 70 put him in the group at 8-under 136 that included Justin Rose (69), Russell Henley (69 and Martin Laird (71).