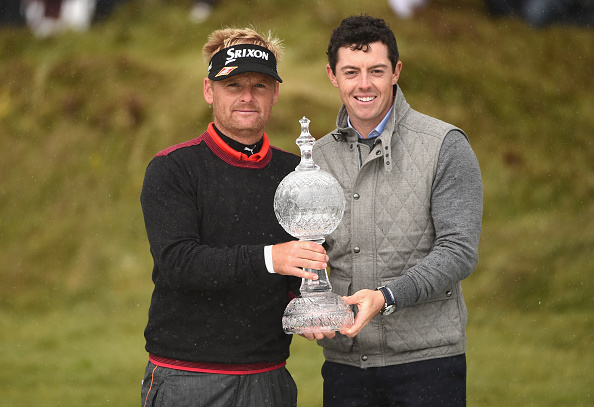 NEWCASTLE, Northern Ireland – Soren Kjeldsen of Denmark won the Irish Open in a three-way playoff Sunday after his short winning putt on the first extra hole just barely managed to avoid lipping out.

Kjeldsen entered the final round with a two-stroke lead, but shot a 5-over 76 to finish tied with Eddie Pepperell of England (69) and Bernd Wiesberger of Austria (73). All scored a 2-under total of 282 on the wind-swept, rain-battered Royal County Down, where just five of the 156 competitors finished the tournament under par.

The 40-year-old Kjeldsen took command of the playoff with a precision chip onto the narrow sloping green of the par-5, 525-yard 18th hole – which he had bogeyed Thursday and Saturday and nearly again Sunday.

Wiesberger’s second shot came up short, while Pepperell twice found the rough to bogey the hole. Wiesberger managed par and hoped Kjeldsen would slip up.

But Kjeldsen struck a 35-foot eagle putt that stopped just 3 feet right of the pin. His putt for a winning birdie circled the rim before falling in.

Kjeldsen couldn’t help but smile. Ranked just 303rd in the world entering the Irish Open, he qualified for the British Open with the win. He last played in Europe’s biggest tournament in 2009.

“It’s ridiculous, like I’m dreaming but I don’t want anyone to wake me up,” he said while holding the crystal trophy alongside Rory McIlroy, the host for the Irish Open who failed to make Friday’s cut. McIlroy was far from the only big name who struggled, as many struggled to sink even straightforward putts amid gusting winds and violent rain showers sweeping down onto the seaside course from the nearby Mourne Mountains.

Kjeldsen displayed the same final-stretch nerves that had cost him shots Saturday when he bogeyed the two final holes.

On Sunday he lost a one-shot lead at the par-4 17th despite putting to within 5 feet of the hole on a 35-foot birdie attempt amid 40 mph (65 kph) winds. The crowd groaned when his short putt for par rolled wide.

And on the 18th, he nearly threw away his chance at the playoff, over-hitting his third shot from manicured rough straight across the green and behind another green-side obstacle. But he salvaged that position for par.

Kjeldsen admitted that he felt many times like he might have blown his chance of victory with inadequate play, but found reassurance every time he looked at the leaderboard to discover most of his rivals were struggling, too.

“It was just a brutal day for everyone,” he said. “I think the last breath I took was at about 14. I’ve never been as nervous as this.”

The Irish Open is Kjeldsen’s fourth tour victory. He won the 2009 Andalucia Open, the 2008 Volvo Masters at Valderrama, Spain, and the 2003 Johnnie Walker Championship at Gleneagles, Scotland.