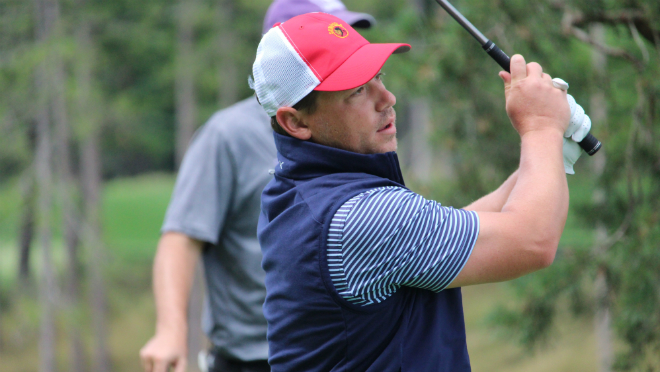 RICHMOND HILL, Ont. – It’s tight atop the leaderboard heading into the final round of the 33rd Canadian Men’s Mid-Amateur Championship held at Summit Golf Club, with Joseph Deraney of Belden, Miss., and Garrett Rank of Elmira, Ont., sharing the lead.

Deraney, the defending champion, ascended the leaderboard by carding a 3-under-par 68, the lowest score in round three.

“It was windy and it’s very blustery,” said Deraney. “It blows in between the trees. The pins were in some really good locations, so it’s a tough golf course. We knew anything under-par was going to be a good score.”

Deraney made consecutive birdies on holes No. 7 and 8 and on holes No. 14 and 15, moving to 6 under for the tournament. The defending champion, Deraney came from behind to win the competition in 2018.

“Last year I wasn’t that far out,” said Deraney. “I was in the second-to-last group and clearly visible to the guys behind me. Again, this golf course is set-up pretty difficult. You have to keep hitting shots. If you need to start pressing towards the end, you can do that, but the first 14 to 15 holes you just have to play good golf.”

A double-bogey on the par-4 1st erased the two-stroke lead Rank carried into the third round. The three-time champion recovered with three birdies and an eagle on the par-5 16th.

Both Deraney and Rank bogeyed the 18th hole, giving them a one-stroke lead over Charles Fitzsimmons of London, Ont.

Fitzsimmons, who carded the low score in the second round, is alone in third at 5 under. The reigning Canadian University/College men’s individual champion briefly led on Thursday, ultimately carding a round of 1 under.

Mike Aizawa of Richmond, B.C., is alone in fourth place at 1 under for the tournament, shooting a 2-under-par 69 in the third round.

Philip Arci (Vaughan, Ont.) rounds out the top-five at even-par.

In the 40-and-over Mid-Master division, Mike Dinner of Burlington, Ont., has opened a three-stroke lead. Dinner carded a round of 2 under on Thursday and now sits at 3 over for the tournament. He is in eighth place in the Mid-Amateur division.