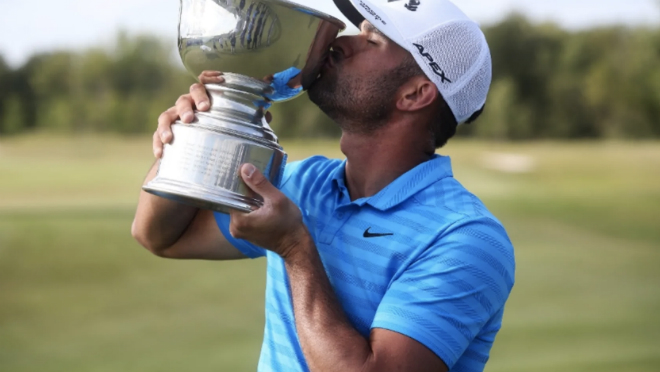 WINNIPEG — A new father as of nine-months ago, travelling to Comox, B.C. for Mackenzie Tour Q-School in April was the first time that Derek Barron was forced to be away from his son, Bennett.

Four months later, signing for an even-par 72 in a gusty wind that prevented any player in the final 18 groups from breaking 70 at Southwood Golf & Country Club, Barron was victorious at the 100th edition of the Players Cup, his first Mackenzie Tour – PGA TOUR Canada win.

“This makes it worth it,” Barron said. “This just affirms that I am doing the right things in my life and in my career with what I do every day.

“The fact that I have a wife and a son and to have to leave regularly and be away from them, it’s really difficult,” said Barron. “This makes it a little easier, because it’s hard to leave them and I love them so much.”

Relatively new to professional golf, Barron says he was “remodelling apartments” when he was the same age as many of the players on the Mackenzie Tour and taught golf for a living from 2012-2016 before deciding to give Tour golf a shot.

Without the support from his family and friends in Washington, Barron recognizes his career path may not have been a possibility.

“My wife is amazing. She wants me to do it as long as I can and she supports me and takes care of Bennett and my extended family at home chips in, it’s a real team effort,” said Barron. “It makes me appreciate the opportunity others have given me and the work and the time and the guidance they have all given me to get to this point.”

With his wife, Madi, at home watching Bennett, Barron stepped onto the driving range Sunday morning in preparation of his 12:50 P.M. tee time, in the final pairing of the day alongside Brad Miller, who led by one.

“I told myself this morning when I felt the wind that the game plan was going to be to have as many birdie looks as possible,” said Barron. “It didn’t matter if it was 20, 35, 50 or eight feet. I’d take my chances with the putter. I just had to hit it solid.”

With Miller struggling throughout the day, Barron took advantage and found himself in a three-way battle for the championship, attempting to fight off Kyler Dunkle and Ryan Snouffer.

Calm and composed, Barron made birdie on No. 14 and, after making par on No. 15, made a five-foot birdie putt on No. 16 to take a two-stroke lead into the final two holes.

“I just did what I did all week, kept it in play and stuck to the game plan,” said Barron, who navigated the final two holes without much stress. “I didn’t mind having seven, six, or five irons into greens because I was confident in hitting the middle of the greens and taking the 20 or 30-footers, so I was proud of how I hung in there and stuck to my plan.”

With two events left in the Mackenzie Tour schedule, the win moves Barron from 54th to 7th on the Order of Merit, a spot that would award him Korn Ferry Tour status and an exemption into the final stage of Q-School in December.

“Hopefully this is a launching pad for something bigger in the next year or two,” said Barron. “All I can do is try to do the same thing and see what happens.”