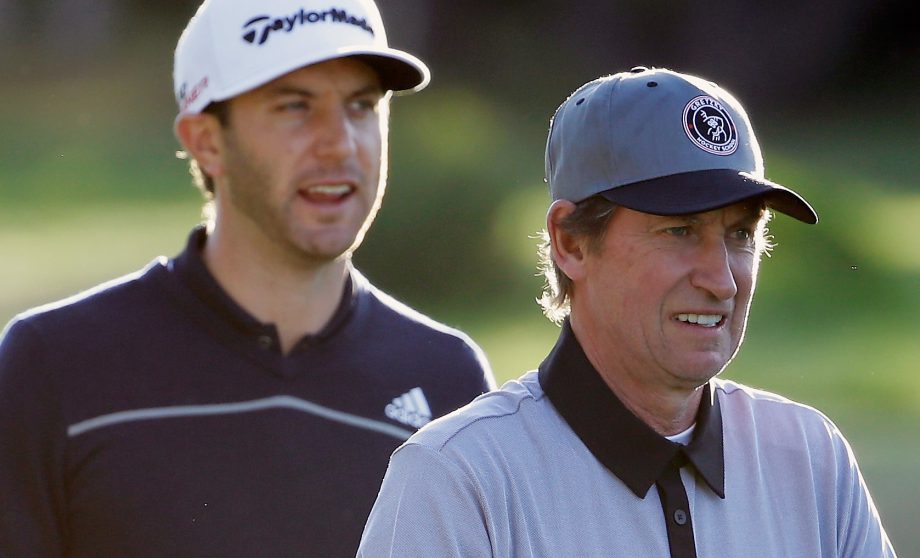 Dustin Johnson’s famous father-in-law once said: “You miss 100 per cent of the shots you don’t take.”

The deeper meaning behind those simple words from the great Wayne Gretzky speaks to the value of determination and persistence in the pursuit of one’s desired objectives – and it has resonated with the American golfer in his quest to score a PGA major.

Having finally accomplished his goal in June after a number of close calls, the 2016 U.S. Open champion can now fully appreciate the deeper message behind that motivational quote from the Canadian hockey icon.

Looking back at Johnson’s quest to capture his first PGA major, the Coastal Carolina University alumni, has had his fair share of heartbreak and failed attempts.

Johnson’s first near miss came at the 2010 PGA Championship when a two stroke penalty on the 18th hole cost him a chance for a three way playoff.

Then there was the British Open in 2011, when the South Carolina native fought hard for his first PGA major but had to settle for a second place tie.

But perhaps the one that was most painful and stands out the most came at the 2015 U.S. Open at Chambers Bay.

It was there that the 6 foot 4 inch American stepped onto the 18th hole with a 12 foot putt for eagle which would have finally given him his first career major title.

However, many golf fans will still remember the three-putt which left him emptied handed again and gave Jordan Spieth his second major.

In a sport where so much is played between the ears, that sort of break down on such a big stage can be devastating; and some simply aren’t able to recover mentally from such disappointment.

But that certainly was not the case with Johnson; who has used the disappointment from Chambers Bay as fuel to come back even stronger.

Johnson enjoyed a stellar start to 2016 with six top ten results in his first ten tournaments; and carried that momentum into this year’s U.S. Open.

Going into the final round at the Oakmont Country Club, the talented golfer known for his length off the tee put himself in prime position to take another shot at his first career major title – and this time he didn’t miss.

Despite the controversy of a potential penalty from the fifth hole of the final round where his ball moved prior to the actual shot, the American remained composed and managed to record a three shot victory.

“Especially with the things that happened last year at the U.S. Open on the 18th hole, you know, to come back his year and to get it done, it’s definitely bitter sweet. It was a lot of fun,” said Johnson after claiming his first PGA major on Father’s Day – approximately nine years after turning pro in 2007.

“You know, coming into today, I’ve been in this situation time and time again. So I know what to expect. I know how to handle myself. For me to finally get it done on Sunday in a major, it’s a huge monkey off my back,” added Johnson who celebrated his 32nd birthday just three days later.

2016 U.S. Open runner up Shane Lowry of Ireland spoke afterwards about the American’s composure despite the distraction of a possible penalty.

“I credit Dustin for playing the way he played on the way in, having that hanging over him, because I probably would have wanted to know straightaway if it was me,” Lowry noted.

After his triumph at Oakmont in June, Johnson continued his winning ways by capturing the WGC-Bridgestone Invitational in early July.

By the time Johnson arrived in Canada in late July for the RBC Canadian Open, the excitement from capturing his first major had settled; and it was evident his focus had now shifted to winning his next major.

“One of the things is especially when I’m teeing it up in a major, I’m not still trying to get that first one. And I know what it takes; I know I’ve got what it takes to get it done. That obviously gives me a lot of confidence when I’m out there playing,” he said prior to teeing off at Glen Abbey.

While chasing greatness on the golf course will always remain a main focus, the 32-year-old married father of one highlighted the fact that his first priority ahead of everything else is now family.

“I’m definitely enjoying being a father. Tatum is one and a half, so it’s been so much fun.  It definitely changes your outlook on things. Where before, golf was probably my most important thing, and you know, now golf is kind of secondary and family is first,” said Johnson, who is currently the second ranked golfer in the world.

The American’s desire to put family first also explains his decision to opt out of the Rio Summer Olympics – with the 32-year-old citing the Zika virus as his reason to pass on the opportunity.

Given his family ties to Canada through his marriage to Paulina Gretzky, he spoke fondly about his return to Glen Abbey and having relatives onsite showing their support – including one of Canada’s most recognized and beloved hockey dads, Walter Gretzky.

When action got underway, Johnson played solidly and his name appeared at or near the top the leader board throughout the entire tournament.

Despite finishing in a three way tie for second place behind Venezuelan Jhonattan Vegas, Johnson was pleased with his overall performance.

“Look, it has to do with the putter. I just did not roll it that well. Honestly I had a good finish,” he said after completing the 18th hole. “I think the game is in really good shape.”

Looking ahead, if the 32-year-old American is able to maintain his current level play for the remainder of the season, he would be in great shape to take over as the world No. 1.

Having found balance off the golf course through his family; and having finally gotten over the hump in June at Oakmont to win his first major after nine years as a pro, Johnson’s confidence is finally at a point where it matches his talents.

And with this, it’s safe to assume that it won’t take Johnson another nine years – and as many near misses – to score his next major title.