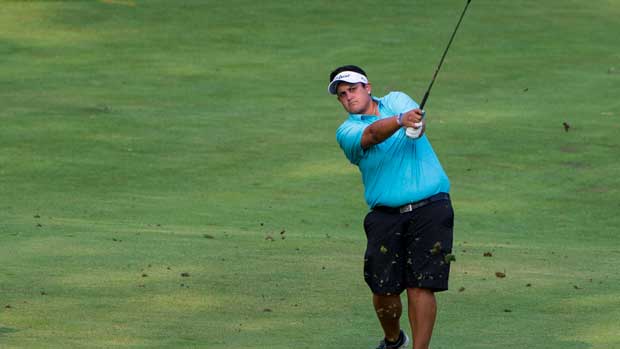 Daniela Iacobelli during the first round of the Tullymore Classic in Stanwood, Michigan. (Symetra Tour)

CANADIAN LAKES, Mich. – Daniella Iacobelli, who was born in Detroit, shot an opening round 64 to take a one shot lead after the first round of the Tullymore Classic at Tullymore Golf Club.

“I just kept telling myself to keep giving myself chances,” Iacobelli said. “I made a 7-footer, a 7-footer and a 3-footer to start the day and I was like well if you keep it inside of 10-feet you’ve got a chance so I just tried to hit the greens and put myself in the right spots to give myself the best looks at it and I got on a pretty hot streak on the front, fizzled out a little on the back but it was a good day.”

Iacobelli, who sits a shot clear of Rachel Rohanna and Chie Arimua, was one of 66 players to shoot under par on the day.

“Honestly no,” Iacobelli said on if she thought the course would play this way on day one. “I thought they were going to set up the course to be where 72s and 74s win it but when I got out here today and the course was in such great shape that if you put yourself in position obviously it was feasible since I’m not the only one who went low today.”

Iacobelli is proud to be from the Great Lakes State and enjoys being back for the Symetra Tour’s Midwest swing.

“I just love Michigan golf,” Iacobelli said with a smile. “It’s some of the prettiest golf courses I’ve ever played on, including Tullymore. This place is awesome. I’ve never seen so many people with such attention to details ever. It feels like an LPGA event out here. They’re doing a great job.”

Second round play will begin off the first and tenth tees starting at 7:30 a.m. on Saturday.

The Canadian trio of Samantha Richdale, Jessica Wallace and Sara-Maude Juneau all posted an opening round of 4-under 68. One shot back is Augusta James with a round of 69.