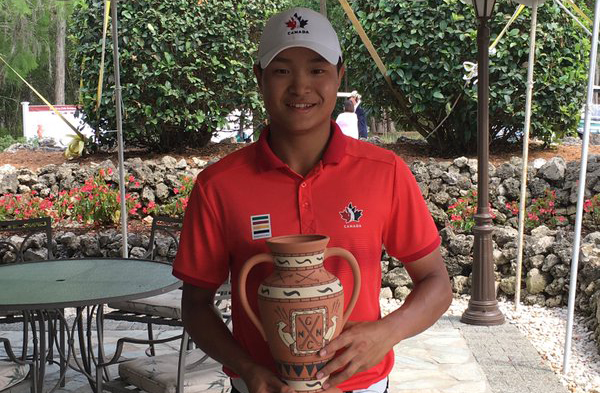 The University of Houston commit began the day two strokes off the pace set by leaders Andy Zhang of Reunion, Fla. and Andrew McCain of Jacksonville, Fla. Gil found himself still two strokes back on the 16th hole, until both Zhang and McCain bogeyed two of their final three holes to leave the door open. Gil jumped on the opportunity, birdying the par-5 18th to seal the come-from-behind victory. He closed the tournament at 2-under par (72-71-71), with Zhang finishing alone in second at 1-under (71-70-74).

Former Team Canada member Matt Williams of Calgary also made his mark in Naples, cracking the Top-10 with a T9 finish at 7-over par. Alistair Tidcombe of Wolfville, N.S., came in at T33 and Team Canada’s Eric Banks of Truro, N.S., struggled to end at T62.

The Terra Cotta Invitational is a “B” ranked event on the World Amateur Golf Rankings (WAGR), featuring many of the world’s top amateurs and boasting past champions such as Bud Cauley and Matt Kuchar.

Tony Gil with the birdie on 18 to take the lead at @terra totaling pic.twitter.com/rlO6CyK0wJ