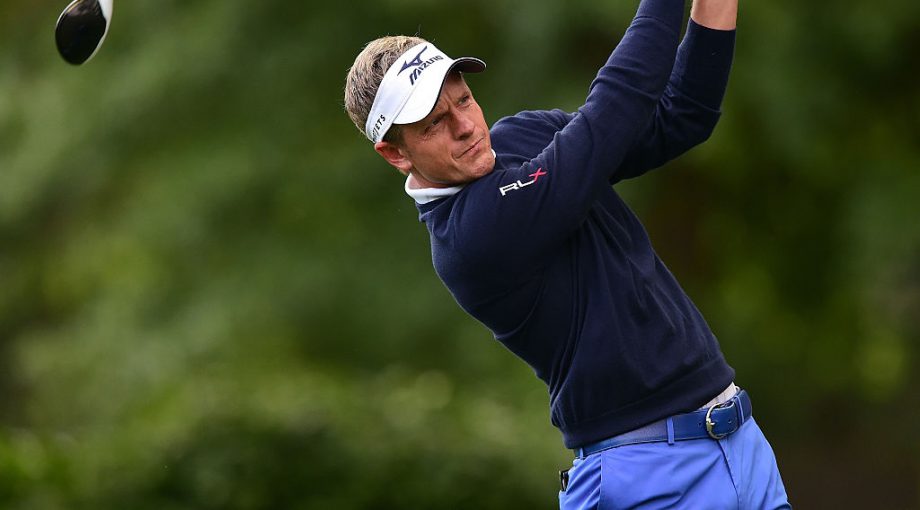 HILTON HEAD ISLAND, S.C. – Missing the Masters made Luke Donald’s blood boil. The former world No. 1 channeled that anger to shoot his best round since January, a 5-under 66 at the RBC Heritage that left the Englishman tied with Branden Grace for the first-round lead Thursday.

The two were a stroke ahead of four players, including the world’s current top-ranked player in Jason Day.

Day caught Donald and Grace at the top heading to Harbour Town Golf Links’ closing, lighthouse hole. But he took an unplayable lie in a bunker when his ball bored into the sand and made his lone bogey to fall back.

Donald had been a major tournament mainstay since first playing Augusta National in 2005. However, he has fallen badly the past couple of seasons (he’s 95th in the world ranking) and was forced to watch the Masters at home instead of playing for a green jacket.

Donald shared his frustration on social media, posting on Instagram that not playing the major “quite frankly, it makes my blood boil.”

So Donald turned things around at one of his favorite layouts in Harbour Town Golf Links, posting his best score in three months since consecutive 65s at the Sony Open in Hawaii.

“I feel like I’ve got a few good years ahead of me,” the 38-year-old Donald said. “I don’t want to be sitting at home watching the majors on TV yet.”

He won’t be if he keeps playing like this. Donald got going quickly with birdies on the second and third holes. He moved to 3 under with a birdie on No. 6. After his lone bogey on the par-4 eighth, Donald posted three more birdies on the back nine to break par for the 23rd time in his past 29 rounds at Harbour Town. He has had five top-three finishes the last seven tournaments here.

About the only thing he has not done at Harbour Town is win. A victory this week would put Donald back on the major track.

“I have some good memories and good mojo here,” he said. “It’s nice to continue that with a solid round today.”

Most of the Masters’ main characters took the week off, including new dad and major champion Danny Willett of England and Jordan Speith, whose unexpected collapse over the final nine holes after holding a five-shot lead opened the door for Willett.

Day, who tied for 10th at Augusta National, is the lone top-10 player competing.

Day tied for the lead with a birdie on the par-5 15th and had a chance to move on top by himself a hole later, but slid a 14-footer past the cup. The Australians’ tee shot to the final hole was perfect and his approach seemed destined to strike the putting surface – until it didn’t.

His ball buried into the sand by the bunker’s front edge. Day looked a bit bewildered by the gaffe, then retrieved the ball and hit it close enough to hold off more damage.

Day acknowledged his energy level after last week’s major was low. “But you just have to suck it up and get through the week,” he said.

Grace held the lead at 6 under after his birdie on the 15th. However, the South African missed an 8-foot par putt on the following hole to drop back into a tie.

Grace said he came to Harbour Town after playing last week in part because of last year when his tie for seventh jump-started his run to full-time membership on the PGA Tour.

Defending RBC Heritage champ Jim Furyk is out this week as he rehabs from wrist surgery.

Jason Bohn, the 42-year-old two-time PGA Tour winner, returned to the game after his heart attack nearly two months ago at the Honda Classic with a 3-over 74. He was regularly greeted by well-wishers along the rope and played with a tiny, red heart on his golf ball, a reminder, he said, of what’s most important.

While frustrated with his play, Bohn believed he achieved what he wanted – a return to normalcy after a frightening health scare.

“The golf wasn’t so joyous. If I could’ve gone out and shot a couple under par, it would’ve been a lot better,” he said. “But this was a big round for me psychologically, just to know I could get back to competition. I could work my body as hard as I want to compete.”

Bryson DeChambeau, last year’s NCAA and U.S. Amateur champion, played his first event as a pro at Harbour Town and opened with a 70.