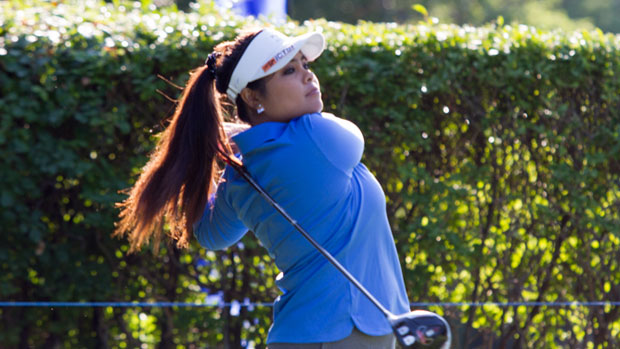 ROCHESTER, N.Y. – Dottie Ardina (Laguna, Philippines) remembers watching videos in the early 2000’s of Jim McLean golf tips to learn how to play. Fast forward 14 years and Ardina has the lead at the Toyota Danielle Downey Classic after carding a 6-under 66 in the first-round at Brook-Lea Country Club on Thursday. Ardina would become just the second player from the Philippines to win on the Symetra Tour. The only player to win was Lynda Jensen, who won once in 1985 and twice in 1988.

A total of 49 players finished at even-par or better and the cut line stands at 2-over heading into second-round play.

The 21-year-old, who ranks 23rd on the Volvik Race for the Card money list, was on fire with the putter. She needed just 24 putts.

“It was a good start today, I made a 35-foot birdie putt on the first hole,” said Ardina. “I made a bogey on five and then I ran off five straight birdies from the sixth through the tenth holes. My goal was 2-under on the front and 2-under on the back, I definitely wasn’t expecting a six-under.”

“I did some adjustments with my putting, my stroke and I’m trying to get my speed better,” said Ardina. “Before, my putting was everywhere – push, pull – so I watched some tips on the Golf Channel and searched putting drills and it worked.”

Her first round shouldn’t come as a surprise. She has finished inside the top 25 in three consecutive events including her career best finish, a tie for second at the Four Winds Invitational.

“I think I am more relaxed and since I changed my putting, I started playing really well,” said Ardina. “My mom is now my caddie and that really helps keep me calm and keep the pressure away.”

Ardina said part of the reason she played well today was the insider information she received from her pro-am partners on Wednesday, who are members of Brook-Lea Country Club.

“I only played once on the front side and twice on the back side so they told me where to hit the ball and where the good angles are,” said Ardina. “They really helped me a lot.”