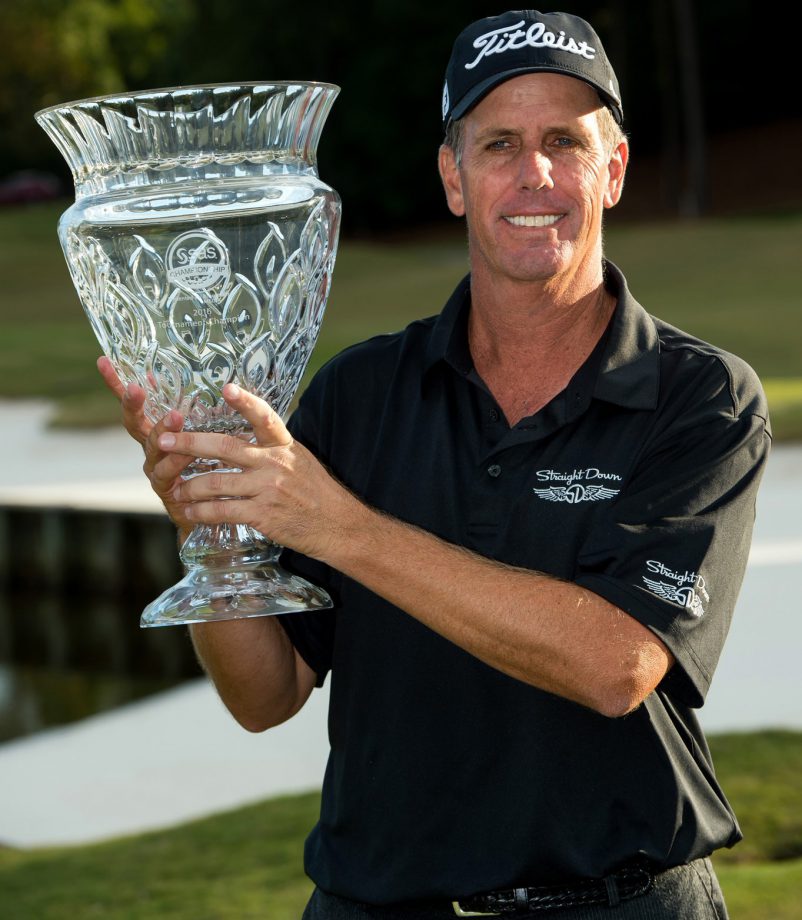 CARY, N.C. – Doug Garwood ran away with the SAS Championship on Sunday for his first PGA Tour Champions title, closing with an 8-under 64 for a four-stroke victory.

The 53-year-old Garwood won in his 44th start on the 50-and-over tour . He finished at 16-under 200 in the regular-season finale at Prestonwood Country Club.

“It hasn’t really settled in yet,” Garwood said. “Someone asked me last week when my last tournament win was and I blanked, I couldn’t think of one, so now I won’t have so much trouble. Feels great. It was a great day, played well. Beat a champion in Bernhard Langer, and Larry Mize in my group.”

Langer, two strokes ahead of Garwood and Mize entering the day, had a 70 to finish second.

“Doug just played phenomenal,” Langer said. “His putter was hot. He just hit it and went in, hit it and went in. He started walking after it and it dropped. He was like 9 under after 16 holes. That’s pretty amazing golf.”

Garwood birdied the last three holes on the front nine for a 6-under 30, made it four in a row on the par-4 10th, added birdies on the par-5 13th and 16th and closed with a bogey.

“The putter was obviously hot today,” Garwood said. “I made a little adjustment. I was aiming a little bit right yesterday and I worked on that and rolled in the 12-footer on 1, rolled in the 40-footer on 3 from the fringe, a short putt, about 4-footer on 4 for a two-putt birdie.

Garwood earned $315,000 to jump to 19th on the money list with $798,744. He also got a two-year exemption to the Mitsubishi Electric Championship in Hawaii.

“I didn’t figure it would ever happen really,” Garwood said. “I never anticipated winning. I’ve never been goal oriented, you know, projecting the future. I like to take it a day at a time, just live in the now. I just enjoy playing golf.”

“I just didn’t have my A-game today,” Langer said. “I missed a few shortish putts from eight to 10 feet, three of four of them that I made the last few days. Then missed a few fairways as well. And this course out of the rough, it’s a very tough golf course because you don’t know how far that ball’s going, whether you get a flyer or not. And when it hits the green, it doesn’t stop.”

Calgary’s Stephen Ames shot 68 to finish T19 at 5-under. Fellow Canadian Rod Spittle of St. Catharines, Ont., closed with a 73 to earn a share of 55th.

The top 72 players on the money list earned spots in the Charles Schwab Cup Playoffs opener, the PowerShares QQQ Championship at Sherwood in California on Oct. 28-30.

A spot also was available for the top finisher in the top 10 in the tournament who ended up outside the top 72 for the season, but all the top-10 finishers were in the top 72.