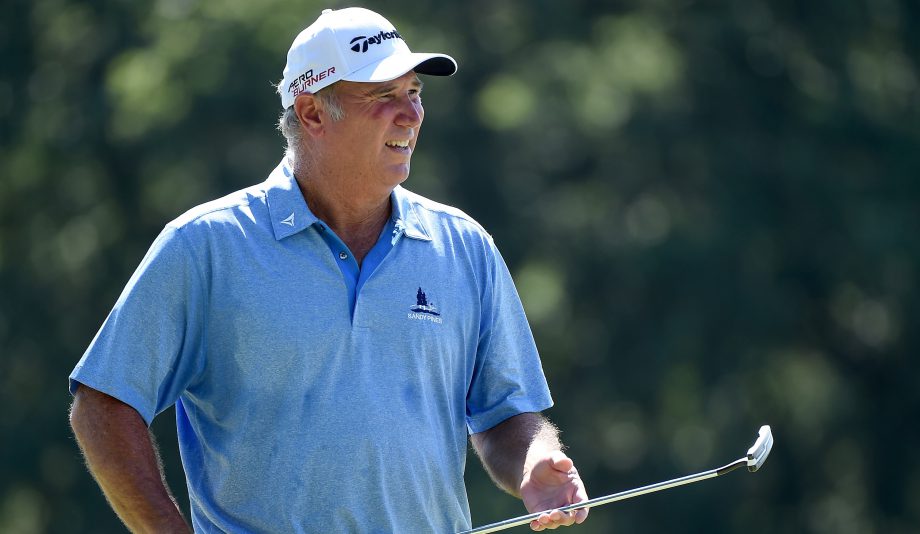 NEWPORT BEACH, Calif. – Duffy Waldorf missed a chance to shoot the second 59 in Champions Tour history Saturday, parring the final two holes for an 11-under 60 in the Toshiba Classic.

Waldorf missed a 10-foot birdie putt on the par-5 18th, coming up short and right.

“It was a trickier putt than I wanted,” Waldorf said. “I didn’t hit the putt hard enough. I had been reaching the hole all day, so I didn’t think that would be a problem.”

He drove behind a tree into the left rough on the closing hole, statistically the easiest hole at Newport Beach Country Club, and hooked a hybrid approach through the green and into the back bunker.

“I tugged it a little,” Waldorf said about his drive. “Yeah, it was nerves, but I felt like if I just hit one solid, I would be in pretty good shape. It didn’t really work out that well. I mean, I thought I might just get a look at the hole.”

Kevin Sutherland is the only player to shoot 59 on the 50-and-over tour. He had a 13-under 59 last year in the Dick’s Sporting Goods Open.

Waldorf tied the course record set by Tom Purtzer in 2004 and matched by Nick Price in 2011, both en route to victories. Waldorf had a 15-under 127 total to break Price’s 36-hole record by a stroke.

The 53-year-old former UCLA player had a three-stroke lead over defending champion Fred Couples in the final full-field event of the year. Couples, also the 2010 winner, had a 65.

“I felt like somebody was going to shoot a low round,” Couples said. “What he shot today was exceptional. Duffy went flying by everyone.”

Waldorf birdied the first three holes and added three more on the front nine, including a 20-footer on the ninth. He made two more birdies and had another three-hole birdie streak that he capped with a 50-footer on 16. Waldorf finished with 11 birdies, hitting wedges into seven of the greens.

“If I get 10 drives in the fairway, I like my chances hitting short irons into greens,” Waldorf said. “I definitely want to be in the fairway here.”

The top 30 on the money after the tournament will qualify for the season-ending Charles Schwab Cup Championship next week at Desert Mountain in Scottsdale, Arizona.