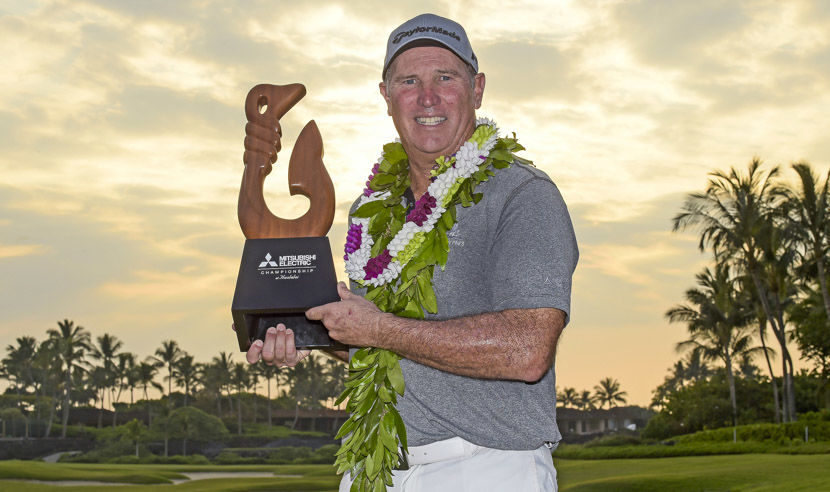 KAUPULEHU-KONA, Hawaii – Duffy Waldorf made a 20-foot birdie putt on the final hole to beat Tom Lehman by a stroke Saturday in the PGA Tour Champions’ season-opening Mitsubishi Electric Championship

The 53-year-old Waldorf shot a 6-under 66 to finish at 18-under 198 at Hualalai Golf Course. He played all 54 holes without a bogey, becoming the fourth player and second winner to accomplish the feat in the tournament. John Cook also was bogey-free in his 2013 victory.

Waldorf has two victories in his last three starts, winning the Toshiba Classic in November for his first senior title. He won four times on the PGA Tour.

Lehman also closed with a 66. After Waldorf holed his birdie putt on the par-4 18th, Lehman left his 15-footer inches short.

Two strokes behind Lehman was six holes left, Waldorf made a 5-foot birdie putt on the par-4 13th and pulled even with a 15-footer on the par-4 16th. Waldorf got up-and-down from the rough on the par-3 17th, saving par with a 7-foot putt.

Waldorf opened with rounds of 67 and 65 to take a one-stroke lead into the final round. He earned $300,000 in his first appearance in the event for major champions from the last five years, tournament winners the last two seasons and sponsor invitees.

Davis Love III was third at 15 under after a 68. The U.S. Ryder Cup captain was making his sixth senior start after playing the PGA Tour’s Hawaii events the last two weeks. He won the PGA Tour’s Wyndham Championship in August.

Tom Watson, two strokes behind Waldorf entering the round after bettering his age Friday with a 65, had a 71 to drop into a tie for 11th at 11 under. The 66-year-old Watson is winless since the 2011 Senior PGA Championship.