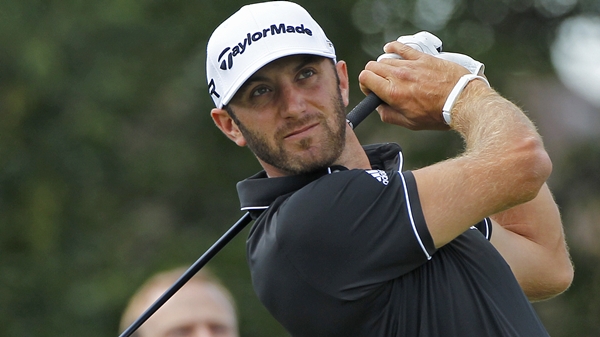 LOS ANGELES – Dustin Johnson moved down the coast of California and brought his game with him Thursday in the Northern Trust Open.

Johnson made six birdies on a warm, sunny day at Riviera for a 5-under 66, giving him a one-shot lead among the early starters. Francesco Molinari of Italy and Torrey Pines winner Scott Stallings were among those at 67.

Johnson closed with a 66 in the grey, cold weather of Pebble Beach to finish one shot behind Jimmy Walker last week. In conditions that could not have been any different – certainly not any better – he made birdie on all of the par 5s and only had one bogey on his card at the long par-3 fourth.

The only comparison was the quality of his golf.

“It was cold, windy and wet at Pebble on Sunday. Here, it’s not a lot of wind and perfect conditions. It’s sunny and a really nice temperatures,” Johnson said. “It’s still golf, though. You’ve still got to adjust no matter what you’re doing.”

As glorious a day as it was off Sunset Boulevard, Riviera was firm and fast, particularly on the greens.

The warmth meant a little more distance, such as the 349-yard tee shot Johnson hammered down the middle of 13th fairway, a slight dogleg left framed by eucalyptus trees. That left him only 97 yards, and he stuffed it. And on the par-5 17th – 608 yards up the hill, no help from wind – he reached it in two and had a two-putt from just over 20 feet. His only glitch was coming up just short of the green and in the bunker on the 225-yard fourth.

Johnson isn’t playing a lot this season, but when he does, he plays well.

He already has a win at the HSBC Champions in Shanghai. He shared the 54-hole lead at Kapalua and tied for sixth, and then took off four weeks before returning at Pebble Beach. That was a good sign for Johnson, who said he doesn’t have a good history of playing well in the first event after a long break.

“This time, I stayed with it. I worked hard at home,” Johnson said. “It was tough at Pebble because of the weather, and it was hard to keep your concentration.”

He still regrets missing a short birdie putt on the 14th, but overall, he had no complaints.

Molinari started well with an ideal tee shot on the short but troublesome 10th hole – far left of the fairway, just short of a bunker, leaving an open angle to the green. He made par, which is satisfactory, and then picked up three birdies over his next six holes.

“The rough is not too punitive, but it’s a good advantage being on the green, and I hit a lot of good iron shots,” Molinari said.

Robert Garrigus, Charley Hoffman and Matt Jones also were at 67. Jim Furyk and Cameron Tringale were at 68 among the early starters.

Jordan Spieth was among those who played in the afternoon, in similar conditions except that Riviera was slightly faster and the air even warmer. He holed out from 125 yards on the seventh hole for eagle and made the turn at 3 under.

Spieth was playing with Fred Couples – the 20-year-old Texan was born a year after Couples won the Masters – and the old guy was holding his own. In his 32nd start at this tournament, he was 1 under at the turn.

The 10th hole was perilous as ever at 314 yards, especially for Scott Verplank. His wedge barely got the bunker in front of the green. His bunker shot went just over the back of the slick, narrow green into the back bunker. The next shot hit the lip and came back into his divot. His fifth shot reached the fringe and rolled back into the sand again. The next one went through the green and into the front bunker again. And then he got up-and-down for an 8.

“That was fun,” Verplank said.

The rest of the day wasn’t. The 49-year-old Verplank, who has been battling injuries the last few years, withdrew with a bad back.

Weyburn, Sask’s Graham DeLaet and Brantford, Ont.’s David Hearn were tied for 35th when play was called due to darkness Thursday. The pair competed their rounds 1 under par.