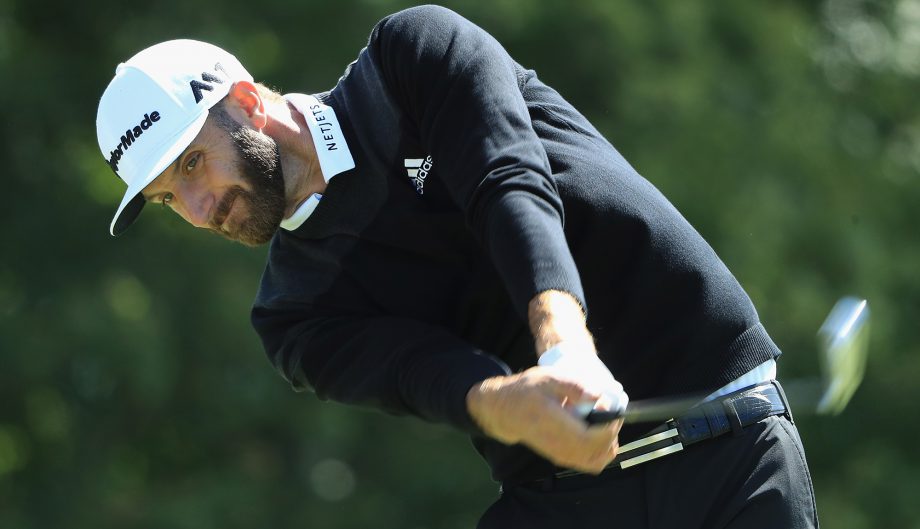 NORTON, MA - SEPTEMBER 01: Dustin Johnson of the United States plays his shot from the 17th tee during round one of the Dell Technologies Championship at TPC Boston on September 1, 2017 in Norton, Massachusetts. (Photo by Andrew Redington/Getty Images)
Associated Press

NORTON, Mass. – Now that he’s finally won again, Dustin Johnson is starting to look as dangerous as ever.

One week after Johnson ended a five-month dry spell brought on by a back injury, he easily handled the early cold and a steady win at TPC Boston for a 5-under 66 to take a one-shot lead in the opening round of the Dell Technologies Championship.

And the world’s No. 1 player made it look easy on a tough day for scoring.

He started with a 35-foot birdie putt on No. 10. He made the turn with a 6-iron from 220 yards that sailed high and rode the left-to-right wind into 4 feet for eagle. When another big tee shot settled into a divot on the reachable par-5 second hole, he laid up short of the water and still made birdie.

Masters champion Sergio Garcia opened with five birdies on the front nine, and then saved his day with a par on his final hole. He hooked his tee shot into the trees, got a bounce into the rough, laid up and then hit wedge to 12 feet and made the putt for a 67.

Jon Rahm also had a 67 that he felt was the best he could have possibly done. It helped that the 22-year-old Spaniard birdied four of his last five holes in the afternoon as the temperature warmed slightly and the wind never went away.

Marc Leishman and Kyle Stanley also were one shot back among the early starters who had to face the surprising chill of morning, a cruel reminder that the end of a New England summer is not far away.

Adam Hadwin of Abbotsford, B.C., and Mackenzie Hughes of Dundas, Ont., both opened with 70s while Graham DeLaet of Weyburn, Sask., and Nick Taylor, also of Abbotsford, shot 72s.

Phil Mickelson, in his last tournament before the picks are made for the Presidents Cup, felt more energy after seeing a doctor and kept his focus on enough good shots for a 69.

“It was nice to have a solid round,” Mickelson said, who had not broken par in the opening round since The Greenbrier in early July. “I played well tee-to-green, and it made for a stress-free day on a very difficult day.”

Johnson played in the group featuring the top three in the FedEx Cup. PGA champion Justin Thomas made 16 pars in his round of 71. British Open champion Jordan Spieth, who lost to Johnson in a sudden-death playoff last week on Long Island, didn’t make a birdie until his 13th hole and shot 72.

“Each part of my game was a little off,” Spieth said.

Nothing looked wrong with Johnson, except for one bad swing and one aggressive putt.

His 25-foot birdie attempt on the 14th hole ran about 5 feet by the cup, and he missed that coming back to slow some early momentum. He bounced back with a wedge into 6 feet for birdie, made eagle on the 18th to reach the turn at 4 under and then had a simple iron off the tee at No. 1. But it sailed right into the woods in a hazard, and he punched out and missed an 8-foot par putt.

Otherwise, there was very little stress except for one young fan who kept referring to him as “Shank.”

“When you win, you’re playing well, so it gives you a lot of confidence,” Johnson said. “For me, that was one thing that was probably lacking a little bit the last few months is just the confidence, because I wasn’t seeing the shots that I wanted to see. I wasn’t consistently hitting them. But after last week, I’ve got a lot of confidence now. I feel like the things I’ve been working on, they are back to working.”

That was as close as a dissertation on golf as the No. 1 player will allow. Johnson doesn’t spend deep analysis over the way he plays. He sees the shot, pulls a club and usually hits it where he’s aiming. That’s what led him to three straight victories going into the Masters until he wrenched his back when he slipped on the stairs and had to withdraw from the first major of the year.

The victory last week was his fourth of the year, tied with Thomas for most on the PGA Tour this season.

As easy as it looked for Johnson, it was anything but that for Kelly Kraft. At No. 64 in the FedEx Cup, his season might be over after he took a 12 on the par-5 second hole. Kraft hit his third into the water and his fifth shot over the green. He tried to hit a shot from a native area, took another penalty drop to go back to the fairway and hit that one into the water. He eventually two-putted for a 12 and withdrew after 14 holes with a sore foot.

Ryan Moore, who missed time with a shoulder injury this summer, had four double bogeys in his round of 82. He also withdrew.