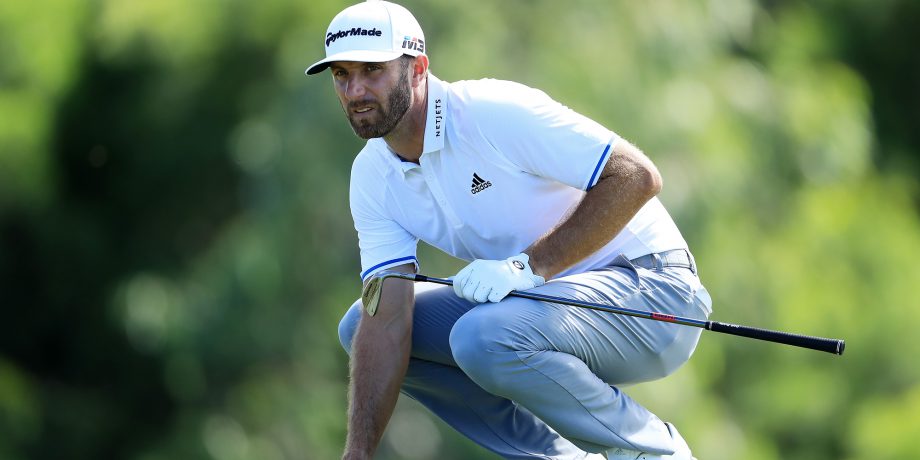 KAPALUA, Hawaii – Dustin Johnson has a long game and a short memory.

Johnson holed a 65-yard wedge shot down the hill and up the green for an eagle, and he powered his way to birdies on the par 5s at Kapalua for a 7-under 66 to build a two-shot lead over Brian Harman going into the final round at the Sentry Tournament of Champions.

The world’s No. 1 player with a lead is a daunting prospect anywhere, especially on a course where he is a past champion (2013) and has posted 20 out of his 30 rounds on the Plantation Course in the 60s.

Hope for the players chasing him comes from Johnson’s most recent start on the PGA Tour.

That was just over two months ago at the HSBC Champions in Shanghai, where Johnson lost a six-shot lead at Sheshan International. Most peculiar about that day is Johnson still was up by three shots, didn’t miss a fairway on the back nine and still got beat.

Johnson says he didn’t even remember Shanghai until it was mentioned to him.

“Look, it was a long time ago,” he said. “It’s a completely different golf course. It was what? Two months ago or something? So yeah, I’m going to try not to think about it tomorrow. Hopefully, I won’t. But I just need to go out and play my game and just see what happens.”

Coming off his lone bogey – a poor chip after his tee shot went just over the back of the 11th green – he had 65 yards from fluffy rough, straight down the hill toward the Pacific to a green that was uphill but with the grain and the wind.

Johnson wasn’t sure how far it was, and that wasn’t really significant.

“I was looking just left of the flag, but short of the green,” he said. “I knew once it got on the green that it was going to be pretty good. And obviously, it went in. So that was definitely a nice bonus.”

The rest of his round was power golf. He drove pin-high on the reachable par-4 14th up the hill and into the wind to set up a simple chip-and-putt birdie. He had a short iron into the green on the par-4 15th to set up a two-putt birdie. He saved par with a 10-foot putt on the 17th and two putts for birdie on the 18th capped off his day.

Harman couldn’t keep pace, dropping two shots early on the back nine until a late rally for a 69 to stay within two shots. Harman began the day tied with Marc Leishman, who didn’t make a birdie until the 16th hole and wound up with a 76 to fall nine shots behind.

Jon Rahm made up a lot of ground quickly with a birdie-eagle-birdie burst on the scoring holes in the middle of the back nine. A final birdie gave the explosive Spaniard a 66 and left him within range at four shots behind.

Johnson and Rahm have a little history. Rahm nearly chased him down in Mexico City last year in a World Golf Championship, and then three weeks later pushed him to the 18th hole in the final of Match Play, which turned out to be Johnson’s third straight victory.

Rahm loves being in the mix with Johnson, even if the outcome hasn’t gone in his favour.

“Hopefully, I can play good down the stretch like I’ve been doing, just start a little better on the front nine,” Rahm said.

He did most of his damage on the three-hole stretch on the back nine where birdies are available. He just missed the reachable 14th and chipped to a foot for birdie, then hit his second shot on the par-5 15th to 8 feet for eagle, and holed a tricky 10-foot putt on the 16th.

Rahm will play in the penultimate group with Rickie Fowler, who shot a 68 to reach 11-under 208. Jason Dufner shot 69 and joined Fowler five shots behind.

Defending champion Justin Thomas spent more time with his father than he planned. Jimmy Johnson, his regular caddie, had a significant setback with his foot and will have to be in a protective boot for the next month. Thomas put his father to work. He had a pair of double bogeys over the last four holes, sandwiched between birdies, shot 75 and was 18 shots behind.

Jordan Spieth played with Rahm and never got much going in his round of 70, leaving him too far back.

Harman qualified for the Tournament of Championship by making a 30-foot birdie putt on the final hole to win the Wells Fargo Championship and avoid a playoff with Johnson and Pat Perez.

“I can’t control what Dustin does. He’s a fabulous player,” Harman said. “He’s going to be really hard to beat tomorrow, but trying to do something I’m not capable of is not the way to do it.”

Johnson will be going for his 17th victory on the PGA Tour dating to his rookie season 10 years. Johnson has failed to win just one year during his career, in 2014.

Canada’s Adam Hadwin sits at 3 over par for the tournament following a 74 (+1) on Saturday.