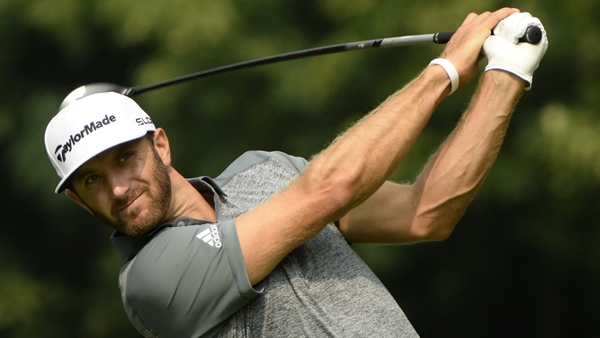 AKRON, Ohio – Dustin Johnson is taking a leave of absence from golf to seek help for “personal challenges,” a swift end to his season that will keep him from playing the PGA Championship, the FedEx Cup playoffs and the Ryder Cup.

In a statement Thursday from Hambric Sports Management, the 30-year-old Johnson said his leave of absence was effective immediately. It did not indicate how long he would be out, though agent David Winkle told the PGA of America he would not be at the PGA Championship next week or the Ryder Cup at the end of September.

“I will use this time to seek professional help for personal challenges I have faced,” Johnson said. “By committing the time and resources necessary to improve my mental health, physical well-being and emotional foundation, I am confident that I will be better equipped to fulfill my potential and become a consistent champion.”

He asked for privacy “as I embark upon this mission of self-improvement.”

Johnson, who tied for fourth in the U.S. Open and tied for 12th in the British Open, was No. 5 in the Ryder Cup standings and virtually certain to earn one of nine automatic spots when qualifying ends next week at the PGA Championship.

As long as he stays in the top nine, he will be replaced by the next player in the standings.

“We will certainly miss Dustin Johnson at Gleneagles, and we wish him the best,” U.S. captain Tom Watson said. “As one of the longest hitters in the game with an undefeated record of 3-0 at Medinah in 2012, he has clearly been an asset for the United States team. That said, the United States is a team with an abundance of talent.”

Players at the Bridgestone Invitational said they were surprised by the announcement.

“If anything, I just hope this is the start of something really, really positive,” Zach Johnson said. “And I don’t know what happened. I don’t know what the specifics are, nor should I know. That’s none of my business. I feel for him.”

Justin Rose called it “big blow for the tour.”

“He’s always been a charismatic player and popular player out here,” Rose said. “He’s not going to play in the Ryder Cup. That will be a blow for the American team. Just wish him well, whatever he’s facing right now. Can’t be easy for him.”

Johnson played poorly in his first Ryder Cup at Wales, not winning a match until the final day in singles. He was the only American to go undefeated last time in Medinah, winning both fourballs matches with Matt Kuchar and handily beating Nicolas Colsaerts in a singles match.

“I’ll tell you what, you always want guys with that kind of power to play on any team,” Tiger Woods said. “I’ve been his partner in the Presidents Cup in Australia, and the firepower that he has, it’s pretty cool to be around. It’s not too often you see the guy carry the ball 320 (yards) without even trying, and then when he steps on it, he can hit it even further. When he gets it going, it’s awfully impressive.”

Johnson was replaced in the PGA Championship by Jerry Kelly. Pat Perez is now the first alternate, and will get into the PGA provided the Bridgestone Invitational winner is already eligible.

Johnson won the HSBC Champions in Shanghai last October at the start of the PGA Tour’s wraparound season. He has seven top 10s this year on the PGA Tour and was at No. 4 in the FedEx Cup standings. He will not be replaced in the 125-man field at The Barclays when the FedEx Cup playoffs begin Aug. 21.

It’s the second time in two years that Johnson has missed a major under curious circumstances.

He pulled out of the Masters in 2012, saying that he tweaked his back while lifting a jet ski. He wound up missing three months, and won in his second tournament back.

Johnson played in the final group in the third round of the British Open with Rory McIlroy, fading with a 71-72 weekend and tying for 12th. He missed the cut the following week at the RBC Canadian Open, and then withdrew from the World Golf Championship at Firestone.

The PGA Tour, which does not comment on disciplinary action, offered little in a statement.

“We have nothing to add to Dustin’s statement, but we wish him well and look forward to his return to the PGA Tour in the future,” the tour said.

Johnson is No. 16 in the world ranking with eight PGA Tour victories. He is the first player since Tiger Woods to go from college to winning in each of his first seven seasons on the PGA Tour. He lost a three-shot lead in the final round of the 2010 U.S. Open at Pebble Beach, closing with an 82. Later that year, he was assessed a two-shot penalty on the final hole of the PGA Championship for grounding his club in a patch of sand, not realizing it was a bunker at Whistling Straits.