Dustin Johnson wins by 11 shots and is back to No. 1 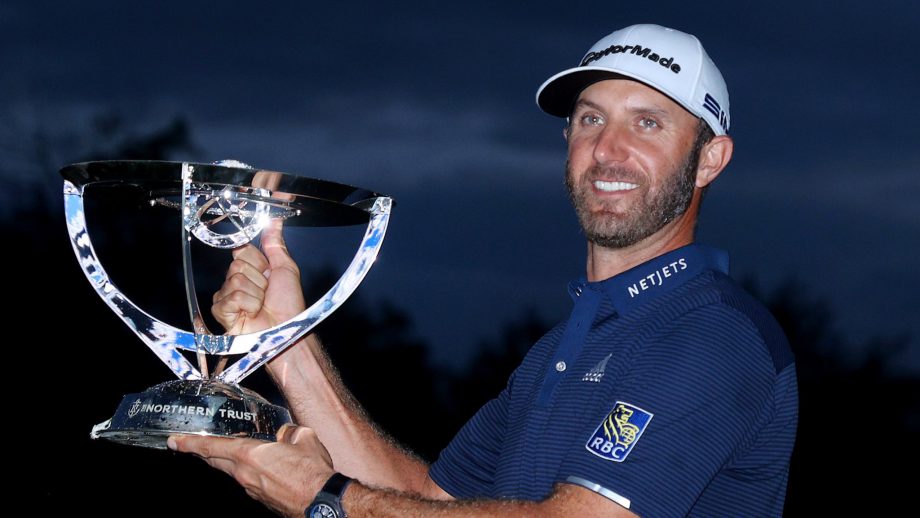 NORTON, Mass. – Dark clouds gathered. Thunder rumbled. Lightning flashed on the horizon. Just as unsettling was seeing Dustin Johnson in complete control of his game with a performance worthy of his return to No. 1 in the world.

He was as close to unbeatable as he has ever been.

Johnson capped off his dominant week at The Northern Trust with an 8-under 63, finishing with a tap-in birdie in the dark following a storm delay for an 11-shot victory at the TPC Boston.

It was the largest margin of victory since Phil Mickelson won by 13 at the TPC Sugarloaf in 2006.

“The best I’ve ever seen him look,” said Claude Harmon III, his swing coach, as he stood off the 18th green that was partially illuminated by the video board that flashed the scores of this astounding feat.

Johnson hit every green in regulation Sunday, and missed only three greens over his last 54 holes. His final 54 holes were rounds of 60-64-63.

Johnson finished at 30-under 254, making him only the third player in PGA Tour history to finish at 30 under or better. He missed the record by one shot set by Ernie Els in 2003 at Kapalua. Jordan Spieth also was 30 under at Kapalua in 2016. Johnson at least holds the record on the mainland.

“I knew I was playing well and I knew the guys were going to shoot low,” Johnson said. “I was trying to get to 30 under. … I’ve never shot 30 under in four rounds. Just something that I wanted to do.”

That was about the only competition he faced.

Harris English figured that out early when he trailed by five shots at the start of the final round, shot 32 on the front nine and fell seven shots behind.

“Kind of had my own tournament that I was playing,” English said. “I mean, really, the goal starting today wasn’t necessarily to win. It was to put myself in position to have a run in the FedEx Cup. That’s why we’re all here.”

English did the job, With a bogey in the dark that didn’t matter at the end, he shot 69 to finish alone in second and moved to No. 6 in the FedEx Cup, securing his place among the top 30 who go to East Lake for the Tour Championship. English started the year with only partial status.

Louis Oosthuizen delivered, too, in what might have been the only drama Sunday. Oosthuizen was No. 99 in the FedEx Cup and appeared to waste his opportunity when he was 4 over through 14. He came to the par-5 18th needing birdie, drove into the fairway, and then had to wait more than an hour because of the storm delay.

He hit the green with a 3-iron, rolled the eagle putt 4 feet by the hole because he could barely see, and knocked in the birdie to move to No. 70 on the number. The top 70 go to the BMW Championship at Olympia Fields next week.

“Most happy 73 that I’ve had in a while,” Oosthuizen said.

Johnson won for the 22nd time in his career, and he never made it look easier. He said his game felt as good as the spring of 2017, when he won three straight tournaments – Riviera and two World Golf Championships – to first reach No. 1.

It was his fifth victory in a FedEx Cup playoff event, tied for most with Rory McIlroy.

Staked to a five-shot lead over Harris English going into the final round, Johnson sent a towering 7-iron over the water to a front pin on the par-5 second, the ball settling 8 feet next to the pin for an eagle. Two holes later, his 3-wood was placed perfectly in front of the fourth green for a simple up-and-down for birdie.

On the 500-yard 12th hole, where on Saturday he hit a tight draw with a 6-iron to a foot, Johnson hit 6-iron with a slight fade to 3 feet for another birdie.

All that was left was to see he could top the 72-hole record of 253 set by Justin Thomas at the Sony Open in 2017. Johnson settled into a string of pars until the final hole, and later said he didn’t know what the record was.

That’s not unusual. During his peak run in 2017, he was poised to break the longest 72-hole tournament record on the PGA Tour at Riviera, the 20-under by Lanny Wadkins in 1985. Johnson was at 20 under with 12 holes to play, went into conservative mode and made three bogeys on his last 10 holes. He was unaware of that record, too, and wasn’t bothered.

Johnson is more about trophies than records. And this trophy was never in doubt

“He can absolutely dismantle a golf course when he’s on,” said Kevin Kisner, who grew up playing junior golf in South Carolina with Johnson. “I’ve been watching it for 25 years. I’m pretty accustomed to it. When he’s on, I just step to the side and try to add to my bank account.”

Kisner did that part well. He closed with a 66, moving him to No. 23 in his bid to lock up a spot in the Tour Championship. He had said all week he wanted to take care of that at the TPC Boston instead of having to deliver next week in the BMW Championship at Olympia Fields, a course he has never seen.

Robby Shelton closed with a 63, enough for him to be among six players who moved into the top 70. The others were Oosthuizen, Harry Higgs, Alex Noren, Russell Henley and Jason Kokrak. Five of the six players knocked out missed the cut, including Phil Mickelson. The other was Denny McCarthy, who shot 73 on Sunday.

Tiger Woods opened with four straight birdies and had to settle for a 66 to tie for 58th. He fell to No. 57 in the FedEx Cup, in danger of missing the Tour Championship for the second straight year.